As the club enters its 5th year as a Table Tennis England Premier Club, all is looking good.  We have a really good nucleus of players who regularly attend our sessions, which has helped the Club continue to grow, with full, uninterrupted, practice sessions right through the summer. We also continue to attract a healthy number of newcomers wanting to give it a go.  We have over 100 members on our register, many of whom will be playing in our 10 Teams entered in the South Devon & Torbay Table Tennis League. That’s more than we have ever entered before and more than any other club in the area. With the extra teams it has been necessary to introduce another night for league fixtures, Tuesdays. 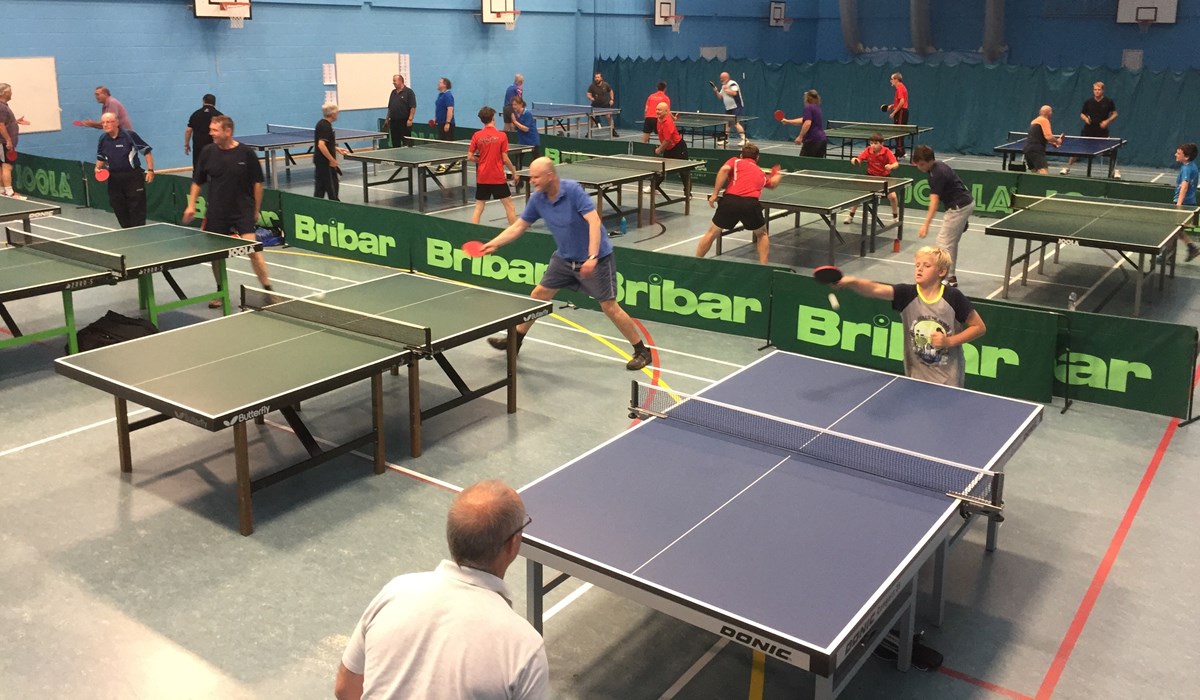 N A Batmen (Div 1) Dennis & Shaun Gibbs (Runners Up last time out) will be joined this season by Naomi Jackson, and helping them out when required, we welcome back Mike Kiff, and they will be hoping to put a real challenge in for the First Division title.

N A Buzzards (Div 1) Remain unchanged but will be hoping for an injury-free season following last season’s melt down.  Sonja Ryland will again be joined by Kevin Nicholls, Jon Cheung & Tony Halse

N A Falcons (Div 2)   We welcome a mainly new team led by Giles Tushingham. Ed Crawford transfers from the Eagles and we welcome aboard Jeremy Broad and Louis Wilshire, both with experience in the Exeter league.

N A Hawks (Div 2)  (Div 3 winners last season) with Mike Coxhead hanging up his bat, Doug Morgan is heading the Hawks’ challenge in Division 2. Doug is joined again by David Doxsey and Ben Swettenham and we are delighted to welcome back Mike Dummett and Alan Tyrrell to help out the Hawks.

N A Kites (Div 4) The Kites still have the Salts, Kevin & Richard and Lewis Short, they will be joined by Simon Baxter in his first year of league table tennis. There is still an opportunity for another player or two to be drafted into the Kites team and we are also looking for someone to be at the helm!

N A Ospreys (Div 4) Rob Ferguson has agreed to lead the Ospreys team, he will again be joined by Sam Hiles & Luke Robins.  We welcome two brothers, Ben & Ollie Pead, to the Ospreys for their first taste of league table tennis.

N A Owls (Div 4)  The Bayliss family dominate the Owls team. Rob leads sons Dylan & Rowan, who will again be helped out by Travis Graham.

All league fixtures can be searched on the league’s website now, or alternatively there is a direct link to your team’s fixtures on our new website (under LEAGUE on the main menu bar).

Club Sessions – Club sessions will run as normal throughout the year as matches will take place in the A.M.S. (Athletic Movement Studio) and the far end of the Sports Hall.  Up to 15 tables will still be available on Friday nights; Saturday morning sessions will continue as normal throughout the year.  With all our coaches now playing home league matches on Tuesdays, there should, hopefully, be more opportunities for coaching during the Friday night sessions.   There will occasionally be opportunities for practice sessions in the AMS on Tuesday nights when only one match is taking place.  I will try and maintain an up to date list on the website showing dates, it would just be for the one table, so please let me know if you are hoping to attend a Tuesday night session.

Open to All  -  We encourage players from other clubs to join our sessions to provide a good mix of abilities and styles.  If during the season your opportunities to practise are reduced at your club due to lack of tables, come and join us.

Early Season Tournament – The South Devon & Torbay Table Tennis League’s Early Season Handicap Tournament is being held at Torbay Leisure Centre, on Sunday 19th November.  Details and entry forms will be available on the League’s website.  Tony Halse is the Tournament organiser and will be able to answer any queries you have and supply you with an entry form.  This is a good opportunity to play against top local players, and with severe handicaps on the better players, everyone has a chance of winning.

Website – Many thanks to all of you who have registered with the new website. This site is being developed by ClubSpark who have been commissioned by Table Tennis England to come up with a data-based website to assist club administrators in their everyday tasks.  The site has a few limitations at the moment but it will expand and develop.  We are one of 3 clubs in England to pilot the website and the first to go live.  I had a good meeting with the website’s developer and Table Tennis England’s Clubs & Leagues Officer recently, which should lead to further improvements to the site.  Although, at the moment, there is little benefit in registering for the individual member (unless they want to pay membership fees) it does help the club with the number of hits, and this in turn will increase the likelihood of others finding our site on Google and other similar search engines.

Facebook – Is here to stay!  I don’t really understand it! I will try and regularly add articles on our page at the end of the week, with details of all our league teams’ progress. www.facebook.com/NewtonAbbotTTC  These articles should also appear on our new website’s home page.

Club Kit – There has been a great take up on the new club kit, with our first order of 94 garments recently delivered.  Further orders are now being taken for the next batch, turnaround by our supplier, Clothing Your Way, is pretty quick so there is still time to get your kit for the early part of the league season.  Hoodies, T Shirts and match shirts are available to all (not just league players) the kit comes printed with your name, team name and club name.  Hoodies £16, Match Shirts £12 and performance T Shirts £8.50. Or £35 for all three.  Exceptional price for good quality items individually printed.  You can even get a free gift if you leave a favourable review on their website!!

Table Tennis Bats – we have found a good supplier of quality rubbers and blades from China, making new bats and replacement rubbers far more affordable.  ie blades from £12 each and rubbers from £4 each.  Have a chat with Tony and maybe have a go with some bats he has made up.

Match Balls  -  Please note that the practice balls that we generally use at the club are not suitable for  matches.  A supply of 6 new plastic match balls will be given to team captains and will be available to purchase from the club. The new plastic balls MUST be used in League matches.

Non-League Players  -  While a great deal of this newsletter is focused on the new season and players, I would like to assure all those not playing in the league this coming season that the club remains just as committed to you. Providing opportunities for anyone to play and improve is just as important to this club, and if you have any suggestions on improving club nights for those not in the League, please let us know.

Pink Pong – Many thanks to all who contributed towards Jon’s efforts in Plymouth for the Pink Pong charity, which was boosted by our Ros Purkiss who donated over £140 collected at a recent coffee morning she organised.  Well done John, Ros and everyone else who contributed. Pink Pong is a table tennis based charity working in partnership with Cancer Research UK.