Unfortunately, I have to start this month’s newsletter with sad news.  Most of you will have already heard that we lost a longstanding League member and frequent visitor to our club, Peter Nicholson, on Saturday 20th January after suffering a cardiac arrest during a match at Teign School on Tuesday 16th Jan. Despite admirable efforts from everyone at the scene, Peter didn’t survive beyond the Saturday when his life support machine was turned off.  Peter, who was 71, as well as being one of the top players locally in his heyday, did a massive amount of work behind the scenes for the League and almost singlehandedly lifted the League out of the doldrums in the 1990s. He will be sadly missed by all who knew him.  Our sincere condolences go out to his family and friends.

Great numbers at all sessions since Christmas, with a good influx of new juniors. Our club’s ethos is just to get folk of all ages active, and if we can help them enjoy the sport and improve, so much the better. We have a good number of coaches and volunteers happy to help new players learn the game, and existing players improve.

Advance notice that the school will be closed on Good Friday, so we will have to cancel the session on Friday night.  I have however been given assurance from the school that the session on the following morning, Saturday 31st March can go ahead as normal.

Division One - NA Buzzards, with games in hand, currently sit third in the table while the Batmen are one point behind them in fourth.  Excellent performances from our First Division sides, particularly from the Buzzards’ Jon Cheung and Kevin Nicholls, and Batmens’ Dennis Gibbs, who all sit high in the averages.

Division Two – It is very tight at the top of the Second Division. NA Eagles are in second place just 2 points off the lead.  NA Falcons are third, with a game in hand sitting just 5 points behind leaders Brixham Seals. Our Hawks are flirting with relegation towards the bottom of the table but have players good enough to pull themselves clear of trouble.  The Falcons’ Giles Tushingham currently leads the averages, with the Eagles’ Jim McIvor and Andy Tyrrell also in the top ten.

Division Three – NA Kestrels, our only team in the 3rd Division are holding their own, well below the top two teams and well above the bottom two teams. Just 7 points separate the 4 teams in the middle and the Kestrels should target that 3rd place!

Division Four – NA Owls sit in fourth place just 8 points off the top and continue to improve; the Kites lie in 5th but are struggling to maintain any sort of consistency. The Ospreys are going well in the Cups and with the Pead brothers, Ben & Ollie, becoming more confident, Sam Hiles winning more often, and being well led by Rob Ferguson, I expect them to see more wins in the League second half of the season.  The Vultures have picked up some new players and some wins; Peter Sercombe, Matt Cyon and Jeff Herne have joined and boosted their points tally for the season and will surely start to climb the table.

I have also received the following report from Kevin Nicholls regarding a recent Devon Veterans match:

A strong-looking Devon Veterans team, strengthened by the return of Dennis Gibbs, travelled to Wiltshire in good spirits to do battle with league leaders Gloucestershire 1 and a very formidable Hampshire 1 side. Dennis was joined by Newton Abbot clubmate Kevin Nicholls, Mike Hugh head coach at Okehampton and Penny Mann a double European veteran bronze medallist in Sweden last year and regular visitor to the club. Following a good journey to Wiltshire with the customary "costa" stop, although no cooked breakfast (sorry Den) the team were all in good spirits, expectant and looking forward to a very competitive and enjoyable day of table tennis.

The first match of the day set the tone for the day. Kevin Nicholls played the highly ranked Gloucestershire no.1 Darren Griffin, ranked no 2 in the over 50's in England. Five tough sets later, Kev caused a big upset and sneaked home 11-9 in the final set, the first of his 4 wins on the day, remaining unbeaten in his singles matches.

The entire match was played in great spirit and the momentum swung one way and then the other. The result was all dependant on the very last mixed doubles where Penny was joined by Dennis. The Devon pair’s experience of playing doubles together for many years with a great deal of success winning many titles, proved a deciding factor, and they comfortably won 3-0 to secure a superb 6-4 win for Devon and inflicted Gloucestershire’s first defeat of the season.

There was a similar pattern in Devon's 2nd game of the day against Hampshire. Some very close encounters with some great table tennis being played, and all players showed off some great table tennis skills.  Den demonstrated his ferocious attacking shots and counter-hits, Mike's two-wing attacking play was a joy to behold, Penny's fantastically consistent close-to-the-table defence and vast experience makes her incredibly difficult to beat and not forgetting Kev’s display of wonderful retrieving skills from some distance away from the table. This match was decided on the very last singles where Mike's consistent power play overcame Hampshire 's top-ranked player, and another close match ended in a great victory for Devon.

A very competitive day of sport, played in the right spirit and without doubt table tennis was the winner on the day!! 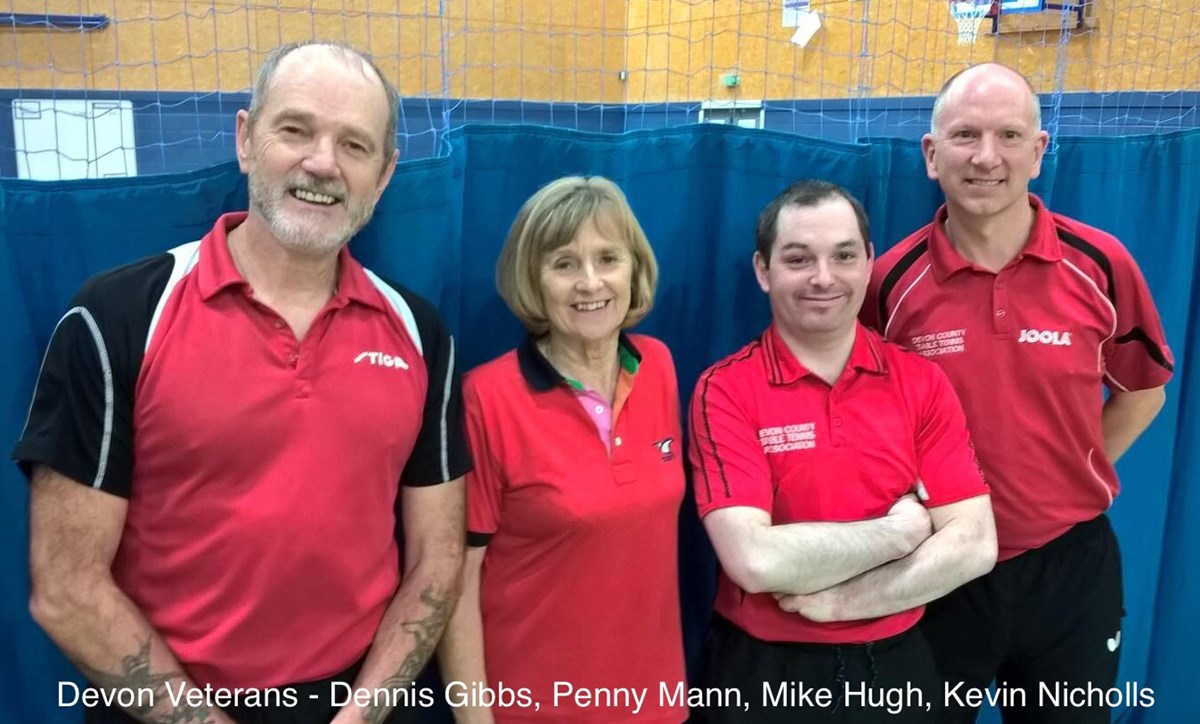 LEAGUE TABLE TENNIS, IS IT FOR YOU?

For those new to the club and hoping to progress to play League table tennis, we are in mid-season at present with our 10 League teams generally having plenty of players signed on, however, occasionally teams struggle to get a side out, so please let us know if you could be available to help out, often at short notice.

League table tennis matches are all on weekday evenings Oct - Apr. A team consists of 3 players each playing 3 singles sets, with 2 of the players also playing one doubles; the evening’s table tennis is usually about 3 hours long, starting at 7 o’clock. At present, most matches are on Tuesdays, Thursdays and Fridays. All home fixtures are played on Tuesday or Friday nights at Teign School; other venues at present are at Torquay Academy, Brixham Community Centre, Torre, Dawlish Leisure Centre, Marldon, Denbury, Bishopsteignton, and Halwell.

While there is no cost to join Newton Abbot Table Tennis Club, there are fees for League players who must join Table Tennis England (currently Seniors £14, Juniors £7) and pay team and individual League fees (currently Seniors £12, Juniors £8).  In addition there is a £5 match fee payable for each home match to cover the cost of the venue.  League fees are reduced if joining after the start of the season, with no League fees for temporary membership (2 matches only).  These fees will be further reduced / waived if you are helping the club out at short notice and are unlikely to play very often.

As a Table Tennis England Premier Club all our regular players should be affiliated to Table Tennis England.  As mentioned above all League players MUST join Table Tennis England as player members to enable them to play League table tennis.  We are fortunate in our club to have a good number of social players and youngsters learning the game, who attend our sessions regularly and should therefore be registered as Associate members of Table Tennis England – this membership is free and does have some benefits – see the attached link for details or speak to Tony who can sign you up.

Sessions open to all - We continue to attract players from other clubs to join us at our sessions at Teign, to benefit from our excellent facilities, and gain some extra practice.  The cost of 3-hour sessions remains at £3.50 for adults and £2.50 for juniors with further reductions for families. There is no membership fee and absolutely everyone is welcome to come along and join in.

Give it a go, for free – Come and join us, we are particularly keen to encourage beginners, females and those just wishing to get more active, at our Saturday morning sessions from 9.00 – 12.00. The Saturday session is less busy and there should be more opportunity for one to one coaching than there is on a Friday night. See who you can bring along!   Remember your first trial session is free.

I have just had another supply of blades and rubbers from China and will be making up a number of good quality bats at very reasonable prices, ranging from £18 - £24.

Club Hoodies, T Shirts and match shirts can still be ordered from Tony.  Hoodies £17, Match Shirts £12 and T Shirts £8.50, or all three for £35.  All garments individually printed with your name, team and club.  Try on a sample to select your size at a club session.

If anyone else has anything they would like added to future newsletters, please do send any pics, news, events etc.

A link to this newsletter is sent to all those players who have attended our practice sessions at Teign School in the last few months.  If you do not wish to be included on my circulation list please let me know.  tonyhalse@hotmail.com

Link to South Devon & Torbay Website for all information, fixtures and results in the local League  www.tabletennis365.com/southdevonandtorbay

Link to join Table Tennis England as an Associate Member - It’s free, so why not do it!? www.tabletennisengland.co.uk/play/membership/associate-membership