The championships kicked off with the Fambridge Trophy groups, open only to Division 3 players, to determine who would progress to the Quarter-Finals. The groups very much went to form; there was a notable success for Sam Mortimer-Ford in group 2 over teammate Ewan Hynd 6, -9, 9, 3, and in group 3 there was a marathon win for Kath Little over Ann Brewer 5, 9, -6, -6, 9, there was also a marathon match in group 5 which was won by Jacqueline Treacy over Oliver Wylie 10, -5, -7, 11, 10. The Quarters involved two juniors and two adults and were all won in straight games bar one, when Ben Porter needed four ends to overcome chopper Mike Burton. No.1 seed Thomas Page, no.2 seed Alan Scammell, and the dangerous Sanjay Saptarshi were largely untroubled by their opponents Kath Little, Mitch Davies and Noah Sage respectively, though Sage did push Saptarshi in all three ends. The first Semi-Final saw an unfortunate walkover for Saptarshi over Scammell, but the other was competitive seeing two of the leagues upcoming juniors, Page and Porter, battle it out with attacking play that saw Page come through -11, 7, 6, 6. In the Final, one would have bet on no.1 seed and favourite Page with his 100% record still intact in the league season, however Saptarshi had been playing well all day and had other ideas; from 2-0 down he fought back to defeat Page and take the Fambridge Trophy -7, -10, 7, 9, 9.

Upsets flowed thick and fast in the Daniel Richardson Trophy, the Restricted Singles open to Division 2 & 3 players. The group stages were punishing, with only one player progressing from each 3-player round-robin, and the top 4 seeds all failed to qualify. In group 1 it was – the lovable - Dave Goody who sprung the surprise with a superb 4, 13, 16 win over top seed Glen Laing and also a good five-ends win over Dave Hancox. In group 2 the Saptarshi Sensation took out no.2 seed Dan Piggott 7, 8, -8, 10 not to mention Colin Barham. In group 3 no.3 seed Victor Chan tasted the wrath of Thomas Page who won 11-8 in the fifth with both players overcoming Martin Knights. And in group 4 no.4 seed Dawn Baldry was put out over three tight games against Alan Scammell 9, 10, 11. The other groups mainly followed the form book, with a notable result in group 9 when tournament organiser Alan Dadswell put down his cup of tea and beat Rod MacLennan 11-9 in the fifth. The knockout stages progressed with no. 6 seed Allan – man of – Steel getting past Mervyn Perriman by the finest of margins -3, 14, -11, 6, 13 and then most impressively Alan Scammell 3, 3, 3 in his Semi-Final. In the Final he would meet no. 7 seed Roger Hance who had certainly earned his place with a Quarter-Final win over the Saptarshi Sensation 10, -5, -9, 9, 10 (phew!) and very impressively in the Semi-Final beating Thomas Page 5, 15, 6. The Final between Steel and Hance was a cracker and with a well-earned and well-fought display of attacking table tennis Hance reversed recent head-to-head results with Steel to win 7, -5, -4, 8, 3.

The Mixed Open singles, open to all except the top 8 Men’s Singles seeds, unseeded and with a random draw, can be kind to some players and punishing for others. It was the latter for this little press officer as Lee McHugh was taken to the cleaners by Dan Young 5, 3, 8 in round 1. Other notable results in the early stages were 2017  finalist Sam Lowman being pushed close by Div 3 player Mike Burton 9, 11, -9, 6, 2018 finalist Steve Whiteley being taken to five ends also by a Div 3 player the Saptarshi Sensation, Dawn Baldry needing five ends to get past clubmate Brian Riedling, Tim Pang needing five ends to overcome the Man of Steel, and finally Neil Want getting past Page by the skin of his teeth 15-13 in the fifth. In round 2 Ryan Pitt took a game off Dan Young before succumbing 11-3 in the fourth, while Ciaran Whelan scored a good win over Steve Whiteley as did Neil Want over Dawn Baldry; the best win in round 2 though was arguably Matt Stringer’s -9, 8, 3, 7 victory over clubmate Chris Ballard. The Quarter-Finals saw Dan Young beat Ciaran Whelan 13, -6, 13, 9 and Tim Pang beat Glen Laing 9, 6, -5, -6, 5 while Eric Green and Sam Lowman overcame Matt Stringer and Neil Want in straight games respectively. The Semi-Finals saw a relatively straight forward 9, 6, 9 win for Green over Pang, and a much closer fought success for Sam Lowman over Dan Young 11, 7, -11, -9, 5 which must have been one of the best matches of the day. In the Final both players were a bit slow off the mark perhaps owing to nerves but once they relaxed a good battle of attack versus defence table tennis ensued and in the end it was Lowman’s patient but explosive style that proved too much for Green 6, 9, -10, 7.

In the Cadet Singles for under 15s the group matches were decided in straight games and the Semi-Finals saw Dan Young beat Ewan Hynd 5, 11, 4 while Ben Porter got past teammate and rival Sam Mortimer-Ford -7, 10, 7, 7. In the Final Porter fought well but Young’s experience, consistency and power proved too much as he ran out a 9, 7, 3 winner. In the Junior Doubles the Cadet finalists Young and Porter teamed up to take the title in a round-robin featuring three other pairs; Oliver Wylie/Thomas Page, Sam Mortimer-Ford/Noah Sage and Ewan Hynd/Hugh Millard; Mortimer-Ford/Sage placed second and the impressive result that secured them the silver was a fine 9, 12, 6 victory over Wylie/Page. The Junior Singles for under 18s was brutally played as straight knockout and saw the top two seeds Dan Young and Thomas Page progress through to the Final with Semi-Final wins over Ewan Hynd and Ben Porter respectively; the Junior Singles Final between Young and Page will be played on Finals Night which is at Champions Manor Hall on the evening of Thursday 21st March.

Now we get to everybody’s favourite events the Handicap Singles and Handicap Doubles where players’ starting points in each game are pre-determined by a handicap ranging from plus 15 to minus 20. In round 1 of the singles the Saptarshi Sensation beat the Man of Steel with a 7-point head start -19, 7, 13 and Matt Stringer did well to defeat Eamonn Hall from a 13-point deficit. Lee McHugh beat Noah Sage with a 21-point difference and then exacted revenge on the Young family by beating Gary Young 15, 17 with a 5-point difference. Dan Young carried the family torch with a – sorry Dave – absolute ploughing 7, 5 win over Dave Hancox with a 15-point difference while Glen Laing made Chris Ballard sweat with his antispin-I’m-going-to-get-you-running-all-over-the-place style winning 13, -13, 20. Tim Pang off minus 8 and Ann Brewer off plus 14 proved to be close, with Pang just edging it 17, 20. Even closer was Reece Seddon versus Dawn Baldry with a 14-point difference, which Baldry won 21, 23, those kind of deuce game wins always being impressive results when won by the lower ranked player. With Dan Young on flying form Martin Knights impressively pushed him all the way losing -17, -20 with a 25-point difference. In a wildly fluctuating round 2 match Glen Laing defeated Angela Clarke 18, -4, 21 with a 23-point difference. Another fluctuating one was Jacqueline Treacy beating Brian Riedling 20, 0 (!) with an 18-point difference. Also in round 2 newcomer Said Alami-Merrouni with a 15-point difference pushed Thomas Page losing -20, 15, -18. The most impressive result in round 2 though must be Sam Mortimer-Ford reversing his Cadet Singles loss to teammate Ben Porter, this time winning 18, 11 in a match played off scratch. In round 3 the Saptarshi Sensation beat Alan Scammell -18, 16, 18 with a 3-point difference while Matt Stringer beat McHugh 19, 18 off scratch, and Dan Young beat Mervyn Perriman 22, -18, 18 with a 12-point difference while Dawn Baldry displayed fine form to beat Steve Whiteley. In the Quarter-Finals the Saptarshi Sensation wasted no time in despatching Stringer 7, 6, while Treacy beat Colin Napper, Mortimer-Ford beat Baldry and in the closest match Young beat Hynd 17, -11, 18. In the Semi-Finals 13-year old modern defender Sam Mortimer-Ford showed great composure to beat Treacy from a 10-point deficit (he’s probably not used to giving away points!) and in the other Semi the Sensation defeated Young with a 19-point head start rather alarmingly 1, 17. The Final was a good match and saw Sam Mortimer-Ford (+5) rewarded for his hard-fought and consistent day’s play as he defeated Saptarshi (+3) 18, 15. The Doubles saw some fearsome pairings drawn from the hat, and Reece Seddon must have marginally forgiven Dawn Baldry for knocking him out of the Singles as they teamed up to take the title, defeating Tim Pang/Brian Reidling in the Final from a 7-point deficit. There were many, many close matches throughout the knockout which is a strong testament to the handicap system; the early rounds saw Neil Want/Rod MacLennan beat Alan Dadswell/Alan Scammell 19, -19, 19, Mitch Davies/Angela Clarke beat Gary Young/Mervyn Perriman -20, 17, 19, Chris Ballard/Allen Steel beat Glen Laing/Andrea Alleyne 15, -17, 20, Want/MacLennan beat Lee McHugh/Jacqueline Treacy -18, 15, 22, Ballard/Steel beat Nick Duce/Thomas Page -14, 17, 21, Mike Burton/Said Alami-Merrouni beat Dan Young/Phil West -20, 13, 18 and Tim Pang/Brian Riedling beat Ken Sheard/Steve Whiteley -13, 19, 20. In almost all of these cases the pair that won the first end lost the match… odd, but not as odd as Rod MacLennan’s fashion sense.

Onwards to Day 2 with the Open and Veteran events! 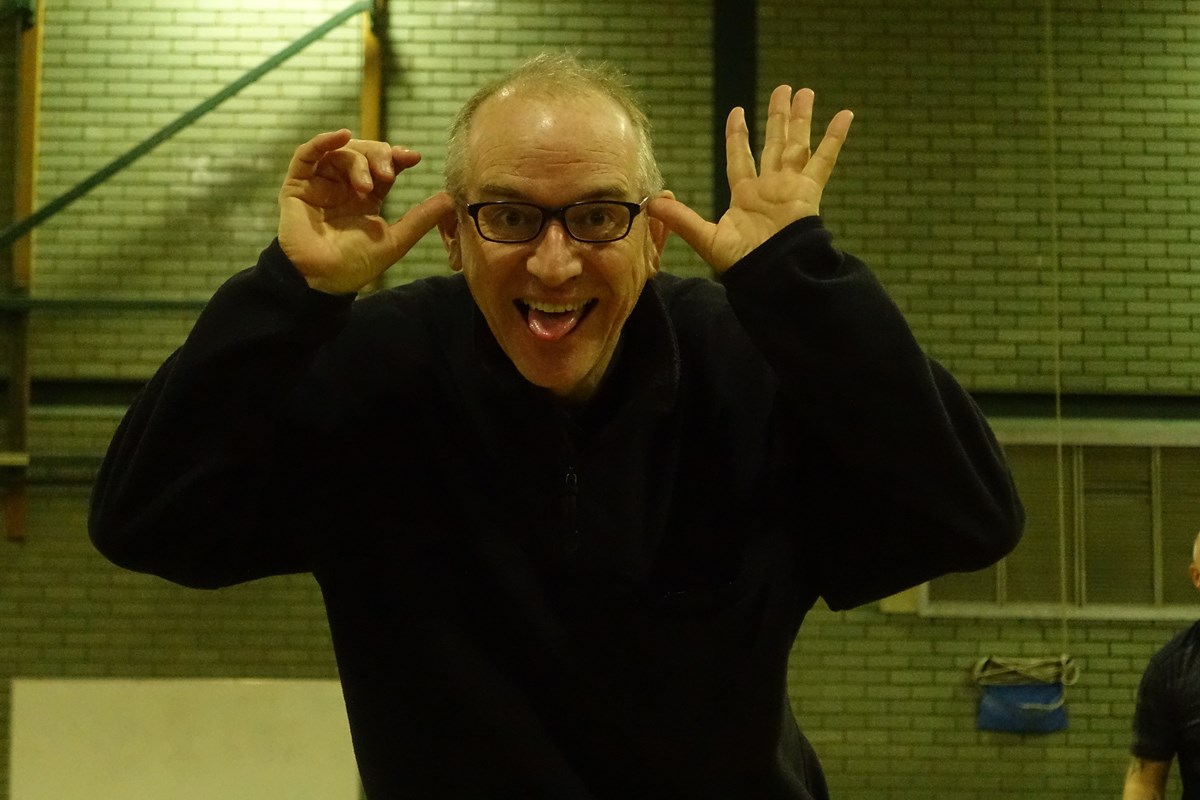