Dedicated to the following special people, who will Always be Remembered;

A Tribute To Colin Crowe

Colin Crowe was a man whom sadly, I neither had the privilege or honour to have ever met, yet one thing is certain - Colin clearly loved his TT! Since suggesting we could have a page dedicated to him I have both collected and been forwarded various bits of information, and have subsequently managed to piece something respectable together. Whilst it is unfortunate that we did not have a website at the most appropriate time, we now do, and so can put that right

The following is a tribute to Colin Crowe; 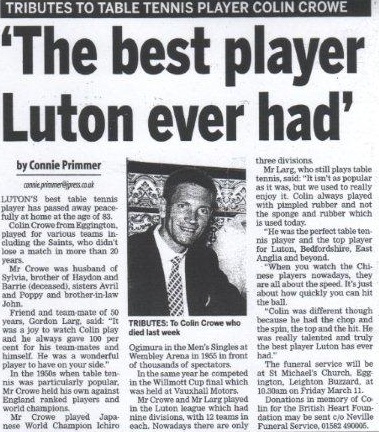 Colin Crowe grew up in Bedford and first took up table tennis on his return from service in the navy in World War II. He played for Bedford Table Tennis Club at the Liberal Club for many years and after becoming League Singles Champion in 1949, he retained it for his next 6 years' stay in Bedford! During this time, he won his first of many County Singles titles and served on the Bedford League Committee for several years until moving away

He initially became involved with the L&D TTL around 1954 with the Saints team - a very strong team which literally dominated the league up until 1961 and also took the Cunningham Cup in '54 and '59. In moving with the times, the team went through various renamings and whilst at 'Kents' in Biscot Road, they again led the way in the top Division until 1971. He also competed in the Willmott Cup for Luton from '58 onwards and County Championships until '71, as well as many Luton & District tournaments throughout, singles and doubles. As a matter of fact, bar just one year, he won the Men's Singles from '56-'66

Colin also happily played alongside various other well-known players in the All England Championships, such as Johnny Leach, Victor Barna et al....

He was part of the County Committee as well as our own from 1956 onwards, became Luton's Vice President in 1972 and remained so for many years. He continued playing until recent years and respresented the County at Veteran events and was even still on the List of Umpires until just a few years ago! 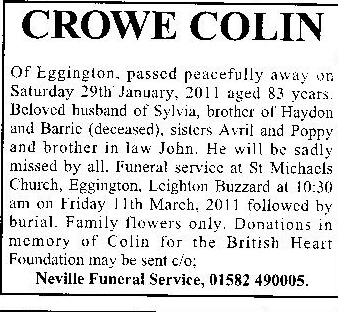 Gordon Larg, who was friends with Colin and his wife Sylvia for 50-odd years, and also played with him in the Luton League & County, has kindly provided the photograph below. It was taken in the 70's in Tossa del Mar, Spain, where they holidayed together 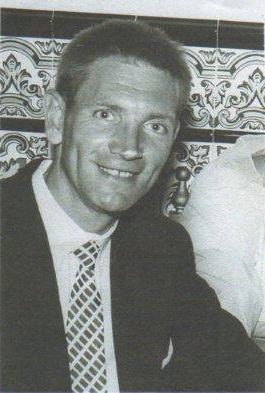 Gordon Larg: "His playing record speaks for itself.... Colin played for the Saints team who never lost a match for 20 years or more... Several times he went through the whole season without losing a best of 3..." 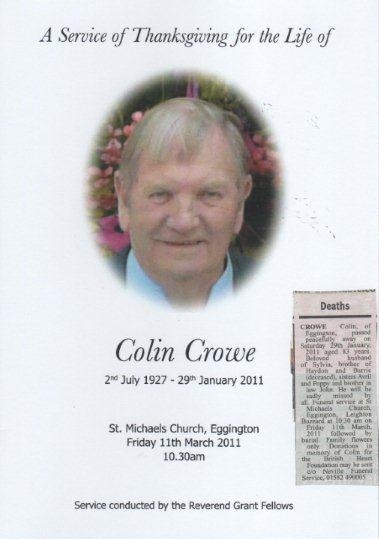 Val Murdoch: "I did not know Colin as a player but he did come to some of the Bedfordshire County Matches and was a lovely man, a real gentleman."

Gordon Larg also wrote: "Colin was the perfect Table Tennis player, modelling his game on Johnny Leach, who always played with pimpled rubber and not the sponge and rubber which is used today. Colin's career covered the era of the best table Tennis players like Victor Barna, Richard Bergman, Alec Brook and the twins Diane & Ross Rowe, and Chester Barnes - England's No. 1. Colin was the top player for Luton, Bedfordshire, East Anglia and beyond.

I have the records for '56-'71 and Colin won 42 titles during the 15 years, winning the Luton/Beds/20 Miles Radius Men's Singles, Doubles, Mixed Doubles and in the '65/'66 season Colin won ALL 8 TITLES, a feat never repeated.

Colin also played in the Luton team which reached the Zone Final of the Wilmott Cup Nationwide Mens Competition in 1955, which was played at Vauxhall Motors, Dunstable, in front of a crowd of over 300 people, against the cup-holders 'East London'. Their team consisted of Chester Barnes - England No. 1, Bobby Stevens - England No. 6 and Bobby Rabould, also England Ranked. Colin was the only player to win a game - against Bobby Raybould."

Further reading/mentions i have found;

Many thanks to all contributors;

Sadly, we have lost another long time member of the LDTTL

IVON WILLIAM BURGESS was heavily involved with our league for a number of years and served on the committee, mostly throughout the '60s

Ivon took on various roles including Committee Officer, Assistant Fixture Secretary and Fixture Secretary. He was also on the sub Fixture Committee and a representative of the County Committee. He was Vice-Chairman of the L&D TTL for the '67-'68 season and is remembered by many from this time, in particular our current president Mike Williams, who has kindly brought his passing to our attention this week

Ivon eventually became Vice President for our 48th season, 1978-79 and remained so for several years...

As you can see above from this week's Luton News obituary, his funeral will be held at 11:15 on Friday the 11th November at Luton Crematorium

Ivon's funeral had a good turn out and a nice service. I have included a copy of the front of the service guide below, kindly provided by our Chairman Chu Tai, who attended. L&D TTL have donated £25 to the Keech Hospice on Ivon's behalf 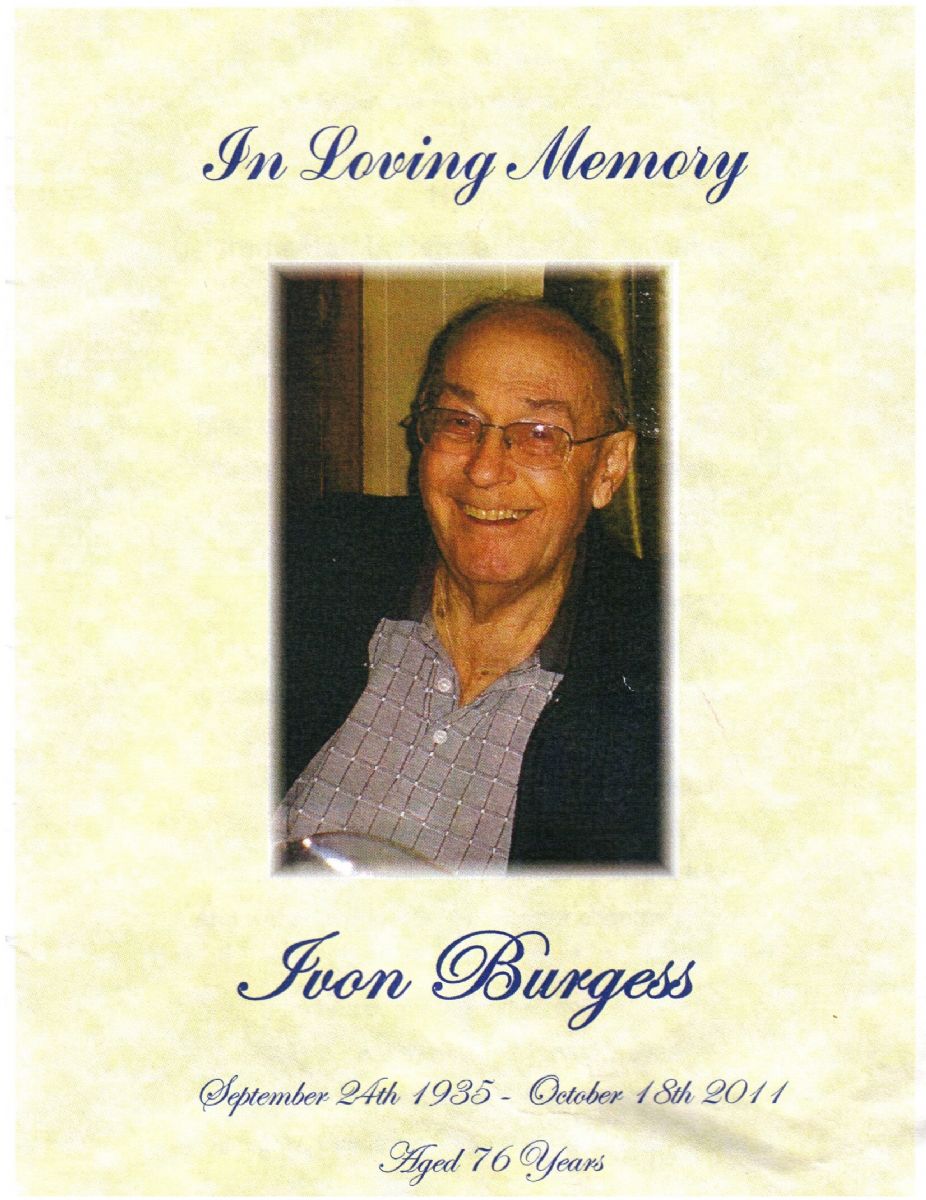 Sadly, Mr Peter Dalley has passed away having lost his battle with cancer

An online obituary can be seen HERE - PLEASE SIGN THE GUESTBOOK IF YOU SO WISH !!

Alex Petrohilos: "Peter had been active from the early 50's I believe in Luton Table Tennis right up to a year and a half ago when he began his decline finding it impossible to participate at all during this last period. He was over 80 years in age and was well liked and a Perfect Gentleman in the True Spirit of Table Tennis as a Sport. He always referred to his 'taking tea at Buckingham Palace' on retirement from Wrest Park, with a twinkle in the eye

We shall all miss him and remember him. Ann, his widow wanted to share her loss with any from the Table Tennis fraternity who knew Peter, conceding at the same time that many of those might not still be around."

There will be a cremation service at the Bedford Cemetery/Crematorium, Norse Road on WEDNESDAY 9th May at 3:15PM

Once again, we have sadly lost another well known local man, who was well involved in our league and it's running

Keith David Hawes passed away peacefully on the 9th January 2014 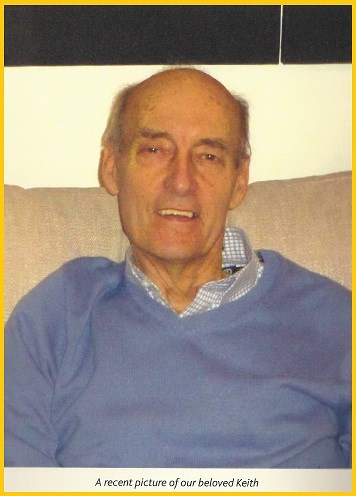 Our Chairman attended the funeral service. A donation on the league's behalf was made to the chosen charity 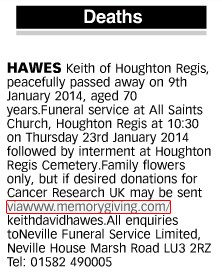 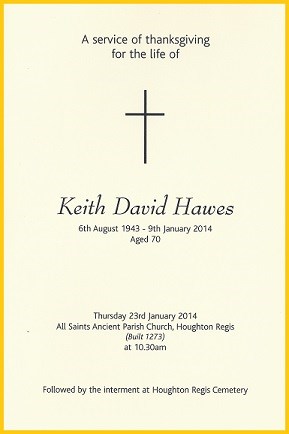 Russ Penn: "I met Keith back in the late 80's, early 90's in Div. 2, when he played for one of the many Vauxhall teams in the LDTTL, in their main canteen area. I found Keith a most difficult opponent, with such an unusal style. Often he left me bemused as to how he could return a "winner" with such great accuracy. His service game was also strong and often gave him an advantage over his opponents. We had many tough games in both the league and cup! Being a good sportsman, he never complained when a net or edge went against him, yet was quick to apologise if it went the other way. When my St Katherine's team needed a replacement player, Keith was first on my list, as I was sure he'd be an improvement to our team. In the years that followed we won the Cunningham Cup and also gained promotion to the old Div. 1. He enjoyed his Table Tennis and the drink after the game. Keith was well respected by all league teams, but mostly by our other team-mate. He was an ambassador for the game, he never let us down, and will be sadly missed."

When fees became too exorbitant, Keith moved on to play for Caddington.

He was the LDTTL Honorary Treasurer & Registration Secretary for several years, during seasons 2004 to 2010, and 2004 to 2009 respectively, and an active committee member

Unfortunately, ill-health became too much for Keith and he reluctantly resigned in October 2009 after having a CT scan

LDTTL Chairman Chu Tai: "When I played with Keith, he was very focused, thoroughly enjoyed his matches and a perfect gentleman, whether he won or lost."

He had been suffering from reduced kidney function for sometime...

The funeral will be at Stopsley Crematorium at 10:30 on Wednesday the 20th May

Dave Griggs passed away on the evening of Friday 22nd October 2021.

He had been ill with cancer for quite a while
Dave played TT in several different teams in both the Dunstable and Luton Leagues over many years
His final team was Caddington
Always in our hearts ??

The LDTTL usually runs 3 divisions, around 24 teams, each winter season