Warwickshire Seniors are in the County Championships Premier next year 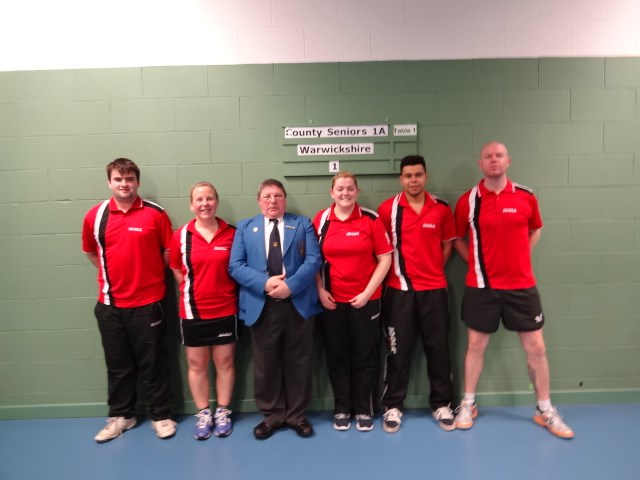 The Warwickshire Senior First Team travelled to Draycott Table Tennis Centre for Division 1A of the County Championships haunted by the memories of losing out to Kent by one individual match in 2014.

Determined to make amends for their previous disappointment, Warwickshire were immediately dealt a blow as once again key players were to let the team down at the last minute, withdrawing from the squad and leaving Captain Ian Ferguson with some tough selection decisions.

The senior team selected for the Saturday was Kenny Lindsay, who despite having commitments already in place for the weekend, stepped in at extreme short notice to make his Warwickshire debut. Laurence Sweeney and Matthew Outhwaite who have made the transition from Junior to Senior County seem like a walk in the park were also selected along with 4 time County Champion Kate Hughes and the ever improving Rachel Pilgrim.  7 time County winner and soon to be veteran Ian Ferguson, was once again called upon for the Sunday despite having only recently started playing again due to a serious finger injury.  Ferguson would replace Lindsay who unfortunately could not make both the Saturday and Sunday due to the short notice that Warwickshire found themselves in with regards player availability.

The first match was against a slightly weaker team from Norfolk, however it was a really positive start for the Warwickshire players, winning 9-1. Rachel Pilgrim was very unlucky in her first individual match against Mollie Patterson, a young up and coming Cadet, losing 9-11, 10-12, 12-14.  The remaining 9 individual matches were all won more comfortably 3-0 and Kenny Lindsay having been thrown in at the deep end by being ranked at number 1 in the County had made an excellent start to his Warwickshire career.

The second match was against Bedfordshire, who Warwickshire had played two years ago in the same division. Kenny Lindsay won the first individual match 11-6, 11-8, 15-13 against Kieran Smith. Matt Outhwaite doubled the lead with a 3-1 win against Bedford’s number 3 Matthew Evans. Bedford levelled the match score at 2-2; with Sandra Harper (who plays with pimples both sides) beating Rachel Pilgrim 3-0, and Jon Hall beating Loz Sweeney 3-1. Kate Hughes gave Warwickshire the lead again with a 3-0 win against Sarah Hudson 11-5, 11-5, 13-11 before Bedford levelled the match once more, with Kieran Smith beating Outhwaite 3-1. However, things started to improve once more for the Warwickshire Bears as Rachel battled hard to beat Sarah 3-1; Kenny with an impressive 3-0 victory against Jon Hall 3-0; Kate beating Sandra 3-1, with Loz finishing off the winning streak with a 3-1 win over Matt Evans. The final score was 7-3 to Warwickshire.

The third match on Saturday was against Leicestershire; another county we had played two seasons ago, achieving a draw. The first two matches were shared. Loz lost 7-11 in the fifth game to Chris Rogers; Matt beat Abraham Conteh 11-4, 11-2, 11-4. Kate had a four game battle against Daria Dzierbicka (who was a particularly awkward player with pimples that she chopped, hit and pushed with); however, after losing the 1st game 9-11, Kate won 11-8, 11-6, 11-8. Kenny beat Dave Gannon to give Warwickshire a 3-1 lead, with both players hitting some good shots off the table. Rachel lost 1-3 to Karen Smith, taking the match to 3-2. In the second half of the match, it was the Warwickshire men who stepped it up, winning all three; Kenny demolishing Rogers 3-0; Loz beating Conteh 3-1; and Matt beating Gannon 3-0. Unfortunately Kate could not get the better of Smith; nor Rachel against Dzierbicka. The final match score was 6-4 to Warwickshire.

The final match on Saturday was against Lancashire. Prior to the start of the weekend, Lancashire were deemed to be one of the stronger teams, so Warwickshire knew they had their work cut out. Despite losing the first game, Loz Sweeney disposed of Ryan Maynard; and Matt beat Jack Dempsey 11-7, 11-9, 14-12. Kate then played Cherith Graham. Kate lost the first game 8-11, however, with Rachel and Mike Browne providing excellent tactics; she went on to win the next three games 11-3, 11-6, 11-4. Kenny gave Warwickshire a 4-0 lead, with a 3-1 win against chopper Paul Cicchelli. Rachel was up next against Emily Bolton.  Rachel won the first game, and should have levelled the match at 2-2 in games, but lost out 12-10 in the 4th. Dempsey took revenge against the Bears having lost to Matt, by beating Loz 3-0. Suddenly the score was 4-2; it was getting closer. Rachel refocused and beat Cherith Graham 3-0, a player ranked nearly 35 places above her. Kenny beat Lancashire number 1 Maynard 3-1 to give Warwickshire a 6-2 lead. Kate then went onto play Bolton. Having being 6-10 in the first game, she fought her way back to win 12-10; and to take the second 11-6, including a round the net shot, which made a few people smile. Bolton sneaked one back to win the third 6-11, but Kate got the momentum going back her way to win the 4th and the match 3-1. This was a positive win for the Warwickshire player against Bolton, who is ranked 21 in the Senior Women. Matt Outhwaite had to battle a little harder against Paul Cicchelli, however, did so in true Matt style. He won 11-8, 6-11, 6-11, 11-9, 11-7. This match had some excellent rallies and Matt certainly demonstrated he had improved against choppers by beating two!! Warwickshire won 8-2 and sat top of the table; joint on points with Cheshire, but one individual match ahead.

All to play for on Sunday……

First match on was the crucial match against Cheshire. Knowing we were level of points, it was an important match for all concerned. Warwickshire had a great start going 3-0 up. Loz playing at number one (in Kenny’s absence) won 3-1 against Joe Pilkington (no 48). Matt beat Jonathan Taylor 3-0, and Rachel came back from 0-2 down to win 3-2 against Janay Gibson. Cheshire pulled one back with Kevin Dolder (England number 34) beating Ian Ferguson 3-1 (a very tough first match; having not played on the Saturday for Ian). Kate then looked like she was cruising her first match against Rachel Baker 11-3, 11-7, only for Rachel to win the third game 6-11. Kate was up in the 4th and had 3 crucial match points, for Baker to hit two backhand clean winners. Kate lost the 4th 12-14, and then the 5th 7-11. Panic started to creep in with the score now 3-2. Baker (having beaten Hughes) became even more fired up and comfortably beat Pilgrim 3-0, and Gibson seemed to get her game back beating Hughes by the same score line. Loz had an excellent 3-1 against Dolder; demonstrating his fine touch play, but also his powerful strokes on both wings; hitting multiple clean winners. Matt Outhwaite had a great win against Joe Pilkington, to give Warwickshire the lead once more. However, the match ended as a 5-5 draw, after Taylor seemed to gain some greater consistency and power, beating Ferguson 3-2.

The second match on the Sunday was against Northamptonshire. Ian Ferguson was up first against Cadet number 1 Alex Ramsden; and lost 3-0 (although the score line suggested it was a lot easier for Ramsden than it actually was). Matt Outhwaite levelled the match score at 1-1 beating Chris Haynes 3-0. Hughes got her act together (eventually) and beat Jordan Wood; at the same time as Loz beat Andy Trott giving Warwickshire a 3-1 lead. Rachel lost out to Nicole Bird 0-3. Ian then finally got going beating Chris Haynes 11-4, 11-3, 11-3. Rachel also beat Jordan Wood, but had to battle it out in 4 games winning the 4th 18-16. This gave Warwickshire a 5-2 lead. It was very difficult to not get distracted by the Cheshire v Lancashire match. Knowing we were only 1 Individual match ahead, it was crucial that we kept this lead! However, Kate had another minor mare (her words) against Nicole Bird losing 7-11, 11-8, 15-13, 7-11, 8-11; whilst Loz lost out to Ramsden 3-0. That left the ever reliable Matt Outhwaite against Andy Trott. It was a topsy turvy match from word go, however, Matt definitely deserved player of the match, saving numerous match points winning 12-10, 8-11, 7-11, 16-14, 11-6. The match finished 6-4 to Warwickshire. Cheshire also won 6-4, meaning we still had our 1 Individual match advantage somehow!

The final match of the weekend was against Yorkshire. It was going to be a close match; and we had to hope that Leicestershire also got some individual matches off Cheshire! Loz led by example beating Michael Fraser 3-0. Matt was really unlucky against his third chopper (James Hobson) of the weekend, losing 9-11 in the 5th game. 1-1. Rachel lost 3-0 to Zoe Cheesman. However, up stepped Fergie in what was to prove a crucial point gained by the veteran Warwickshire Captain. Knowing how important every individual match was; and despite having an injured finger, Ferguson went on to record an excellent 3-1 win against Simon Noutch (Number 35 in England) winning 3-1 (11-8, 11-9, 9-11, 11-7). Kate then comfortably beat Sarah Dyson (nee Noutch) 3-0. This made the score 3-2 to the Bears. Matt added one to this with a 3-0 win against Michael Fraser. Rachel had a 5 game battle against Sarah Dyson and sadly lost the 5th game 8-11. Loz Sweeney finished his weekend off in style by also beating Simon Noutch 3-0 (11-8, 11-6, 11-8) 5-3 to Warwickshire. Ian and Kate both went on to play James Hobson and Zoe Cheesman respectively. With one eye on the Leicestershire v Cheshire match which was at 6-2 to Cheshire; the Warwickshire two knew it was all the play for. As the matches prevailed both Ian and Kate went 2-0 up. At a similar time, Leicester won both of the remaining matches to lose 4-6. Warwickshire knew they had to win by the same score line. However, things didn’t go all Warwickshire’s way. Despite Kate winning 11-8, 11-9, she lost the 3rd game 8-11. Ian also lost the 3rd game in his match 8-11. Following a positive talk with Rachel at the change of ends, Kate kept the momentum going, and won the 4th game 11-7, and more importantly gave Warwickshire promotion to the Premier Division for 2015-16.

Knowing we had done what was needed, in true Ian Ferguson style, he eased off the pressure on Hobson, and decided to enjoy himself, chanting ‘Championies championies ole ole ole’ whilst switching hands every now and again! Warwickshire had beaten Yorkshire 6-4 and sealed the league victory and promotion to the Premiership by one individual match.

Warwickshire had achieved 13 points along with Cheshire; but had won 47 individual matches, compared to Cheshire’s 46. This was a massive achievement for all those concerned; especially after missing out to Kent last season by the narrowest of margins.

Everyone was absolutely delighted, including Inky Moss, who had umpired throughout all the Sunday matches, as well as on lots of occasions in previous years, when we had missed out. Thanks to Mike Browne for his coaching; and Neil Wheatley for umpiring on Saturday.