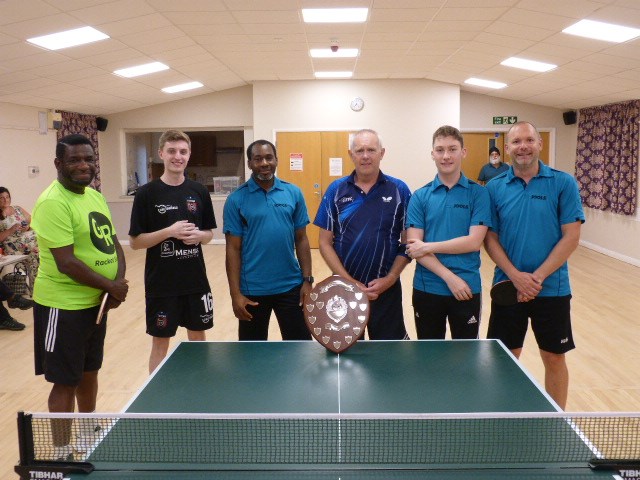 The much delayed Charles Stampe Trophy (CST) Final from season 2019-2020 was contested in early September 2021 at Bluebell Village Hall by two Chatham TTC teams in Ark Royal and Belfast.

Mark Buckley got the favourites off to a strong start when he beat MacDonald 21-16, 21-7 in the first leg giving Ark Royal an early 11 point lead. Charlie Cook had an excellent game against Stuart Fritter and took the first leg 21-19. Fritter replied with a 21-14 leg, but Cook ran out the winner 47-40 with the handicap. Game three had Jake Buckley pitted against Segun Ake and Jake proved too strong for Segun winning 21-17, 21-10.

All the remaining legs went the way of Ark Royal including an impressive win by Stuart Fritter 21-9, 21-6 against Shevron MacDonald in game four.

Man of the match went to Jake Buckley who gained 31 pts on his opponents with Mark Buckley and Stuart Fritter 20 and 22 respectively.

Our thanks are extended to Charles Stampe’s daughters - Cheryl and Diane who presented the trophies. Also, to Malcolm Kay for all his hard work in making the event so successful. Malcolm will be stepping down following this season’s event and we are looking for volunteers!

Pictures from the Final