First this week was a mid-table clash between 2 teams striving for 5th place in the table who on paper seemed evenly matched. At the end of the evening Hullbridge B beat Rawreth B 7-2. With 7 of the 9 matches finishing 3-0 it was a comfortable win for the Hullbridge team. Keith Adams (photo below) was on top form winning his 3 and therefore picking up the MoM award. For Rawreth Babul McLeod beat Glen Johnson while Bruce Kettle managed to beat the fast-improving junior Daniel Young. 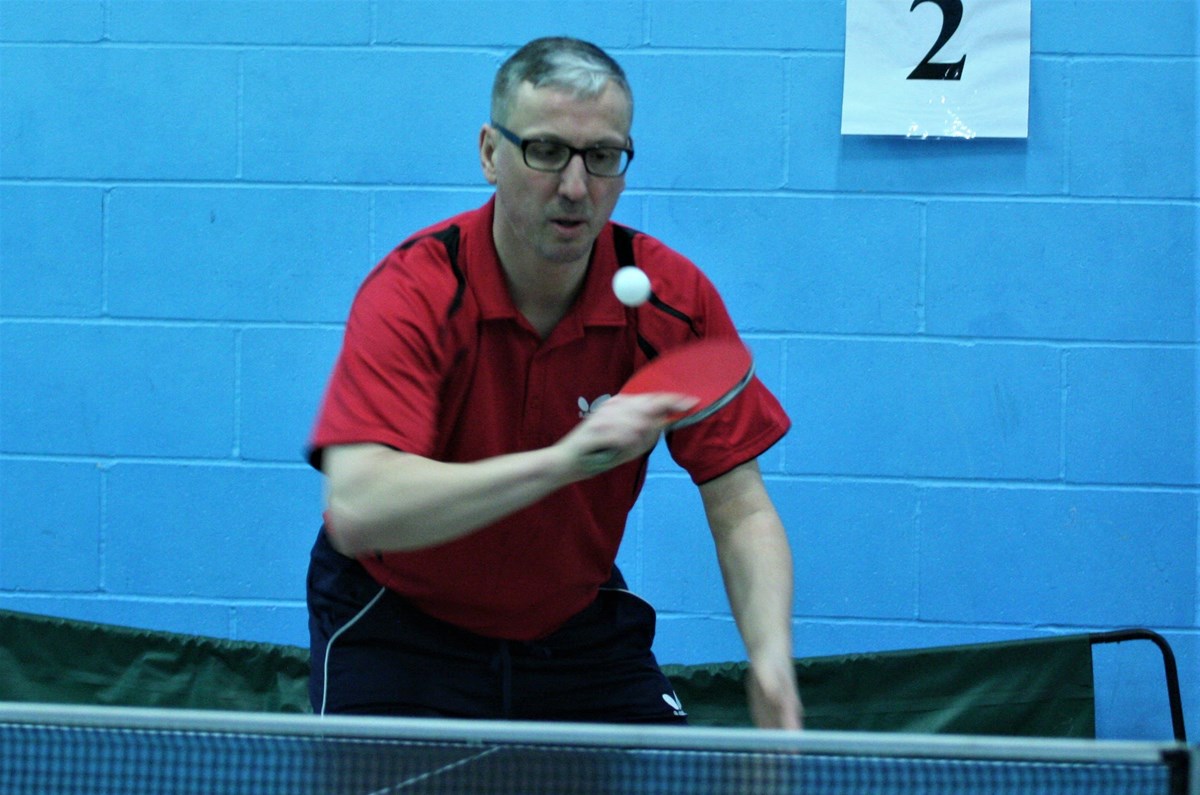 Rawreth A dropped two points this week as their title challenge continued against Hockley A. Steve Tilson was once again unbeaten while there were good wins for Chris Ballard and Matt Stringer over Kevin Read and Ben Warner respectively.

Brand Identity A recorded a crushing 8-1 win over Rayleigh Mill with Steve Sawyer winning the consolation game for the Millers against Barrie Delf, Simon Jacob and Steve Muth won all their games for the home side.

The final game this week was a great battle as Warehouse B travelled to Hadleigh Forum A. Two wins for Dave Bassett and Neil Barker and a single victory for Hamish Innes was just enough to see Forum over the line 5-4. Mark Rudland took the man of match for the away side with three wins, Berti Makolli with the final point for Warehouse with a win over Hamish Innes.

Lentern A were without a game this week but lead the table by 12 points.

Hockley B took advantage with a resounding 8-1 win over bottom club, Rawreth D. Dave Colwill and Alex Barnetson continue to lead the way with hat tricks for Hockley with Stuart Adshead adding two. Sam Thompson saved Rawreth’s blushes by scoring the win over Stuart with Colin Barham unlucky to lose 12-10 in the fifth set against Dave.

Hadleigh Forum B had a close encounter against Customs A, eventually taking the game 5-4. A good all round team performance saw them through with John Tendler and Mick Tappenden taking two each and Tony Jacks one with the supporting role. For Customs, Roy Thomas won all three wit Dale Gutteridge taking the only other point.

Invicta A took on an understrength Brand Identity B team and came away with a 7-2 win. Captain, Steve Marr was able to take all three points with Tony Ayliffe and Mike Piper taking two each. Dave Jacob scored the two points for Brand, with Sean McNabb unable to match earlier form, and Richard Riebold, playing up from the C team unable to make the standard.

RESSC provided this week’s upset by taking the match 5-4 against Hullbridge D. Kevin Smart was unbeaten with three and a point each for Dave Norris and Bob Skews added to the score for the victory. For Hullbridge, penholder, Mike Johnston took two with Andy Seaman and Charles Yeung taking one each. Useful points for RESSC pushing them up the table and nearer to safety.

Canvey A took a close game 5-4 against Hullbridge E, despite Ben Matthews taking 3 for the Hullbridge side. Peter Cray and Terry Giddens score two each with Ray Wilson adding the final point. Harrison Sadler scored the only other point in the game with a good win over Ray Wilson.

Finally, Rawreth C continued their recovery with a 6-3 win over Hockley C. Garry Hartgrove and Colin Clements each were unbeaten on the night to take all the points for Rawreth, with Dan Patynski, Harry Sawford and David Chenery all taking a point each.

Stanford Le Hope C and D threw a huge spanner in the works of the Division 3 table by beating league leaders Customs B and promotion hopefuls Invicta C respectively, and, following a splendid performance by the youngsters of Hockley G against their second placed Hockley E team the table now has a completely new look as we approach the break for the Championships.

Customs hold on to first place despite a 6-3 defeat but are now just two points clear of Stanford D who have played one game more. Mark Downey and Max Russell both won all their games for Stanford who stood at 2-2 early on but the Customs team of Richard Kidd Dean Johnson and Alex Clark just couldn’t get near their opponents after that their only consolation being wins against young Bradley Bond.

On the same night Stanford’s teammates in the Stanford D team enjoyed an even bigger win, 7-2 against previous leaders Invicta C. Tony Papasifakis led the way with a hat trick ably supported by a brace each from Mark Farley and Vaughan Chambers. Three games went to five sets with Tony winning two of them coming back on both occasions from 2-1 down against Richard Verrinder and Keith Baxter. This was Richard’s first defeat of the season and he suffered a second going down in straight sets to Vaughan. Stanford are in fourth place five points behind the leaders but seven points clear of Invicta who do, however, have two games in hand.

Hockley E, second in the table at the start of the week, must have been delighted with these results but their hopes of putting some distance between them and their fellow rivals were ended by their club mates from Hockley G. Oliver George, in particular, was in fine form showing a maturity well beyond his years to overcame veterans Phil Pond and Ron Rogerson and captain Andrew Strutt, chalking up his first ever hat trick having only won one other match this season. Young Rajat Negi chipped in with another point but the E team did manage to win 5-4 overall with Phil and Ron both winning two matches and Andrew one. Rodney Godfrey missed out on the night. Hockley E slip to third four points behind the leaders.

Warehouse D continued their recent improvement in form beating Hockley F 6-3 with a hat trick from Ziming Guo on his debut. They got off to a bad start however, losing the first two games but then ran off six wins on the bounce before losing the final game. Joe Bennett got two wins and Les Carroll one to make up the points and there was a brace for Hermann Maier and one for Graham Gregory for Hockley.

Canvey D kept themselves on the fringes of the promotion race beating Hullbridge H 6-3 which leaves them in sixth place twelve points behind the leaders. Ray Baker, Simon Baker and Steve Parker all won two games but it was another youngster, Joey Page of Hullbridge who took the match honours, winning all his games.

Player of the Week – Oliver George

Team of the Week – Stanford D