The two teams that couldn’t be split in last year’s title challenge came up against each other for the first time this season and it was Rawreth A that came out on top of Thorpe Bay A and how. Granted Thorpe Bay were without top player Alex Abbot but no one could have predicted the 9-0 win that the Rawreth club achieved. There were a number of games that went the distance so the scoreline probably does not tell the whole story but this result puts last year’s Runners Up in a commanding position to go one better this term. Elsewhere there were very close battles and wins for Rayleigh Mill and Castle Point both 5-4 over Hadleigh Forum and Lentern A respectively. End of the week surely came in the Hadleigh match as Minda Sinkus and Dave Bassett went head to head with the 4th end going to Dave 25-23!!, but with Minda taking the match in the 5th end    Duncan 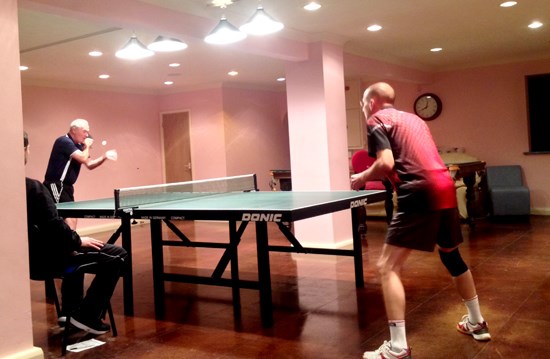 Week 4 and the match of the week was the local derby between Hadleigh Forum B and C resulting in a 6-3 win for the B side. Mick Tappenden continued his unbeaten season, and Anthon contributing 2 and Dave Woolmer 1, the B side earned their bragging rights until the second half of the season. Mark Everard put up the most resistance for the C’s winning two games. Hockley A won their first game of the season beating the youngsters of Hullbridge D, 7-2. Hockley’s own junior, Liam Squirrell was unbeaten on the night with Keith Abbott and the pimpled Tony Vassallo both losing out to Zoe Davies but winning their other two games. Lentern E were another team recording their maiden win, this time beating Canvey B by 8-1. Wayne Farmer and Brian Spencer both picked up hattricks, with Paul Reed losing out to Peter Cray who gained the consolation for Canvey. Finally, Customs A moved up to 3rd in the table with a comfortable 7-2 win over Lentern C with Roy Thomas unbeaten yet again    Barrie

The best news to report this week is the first league game in a long while for SDTTL League Vice President Gordon Swann. Gordon has been away from the table through injury for far too long and it is great to see him back. Gordon’s one win was sufficient to give RESSC a 5 – 4 win at home to Warehouse D. Ron Coutts scored a maximum. Two each from Warehouse’s Steve Bottom and Dave Walton were not quite enough.  Leaders Hockley B extended their lead at the top with a comfortable 8 – 1 win away to Hullbridge F. Joanna Hills saved the home team’s blushes. However, maximums from Paul Strutt and Matthew Stringer ensured the win.  Warehouse C slipped up at home to Rawreth F, losing 6 – 3. Adam Hill and Andy Nunn caused the damage.  Meanwhile, Rawreth G narrowly lost 5 – 4 at home to Wakering. Two each from Dave Accleton and Stewart Mills, with Cliff Noakes contributing a single win gave the visitors the edge. Andrew Deadman and Jack Himpfen-Jones each recorded two wins for the home side.  Castle Point C overcame two-man visitors Basildon Hospital 6 – 3. Two wins from John Beddow and one from Richard Riebold saw them run out winners    David

Division 3 leaders Invicta B lost their unbeaten record losing by the narrowest of margins in a closely fought game with Customs B. Four matches went to five sets and Customs, inspired by man of the match Amar Al Soufi came back from 3-1 down to make it 4-4 before the final game. In another 5 setter Mark Rose, who had lost his previous two matches both in five sets, eventually came out on top for the first time beating Mike Keeble 13-11 in the fifth set after being two sets to love down. Richard Kidd got the other point for Customs and Matthew Keeble recorded a brace for Invicta. Some evening!  Canvey D eased to their first win of the season winning 8-1 at Hockley D with Stuart Curham pinching the man of the match award from Ross Warner, both with hat-tricks, and Simon Baker picked up the other two. Phil Pond got the consolation for Hockley. In a classic match of youth against experience Adam Jackman led Hullbridge G to a 6-3 win against Rawreth H, winning all three of his matches, and well supported by Reece Harris-Griffiths with two wins and Daniel Zeffie with one. Ken Field picked up two and Pat Townsley one for Rawreth    Paul