With the top two sides, Taverners and Torbay Table Tennis Academy II, tied at the top of the 2nd Division, a play-off match was required to determine the champions.  Having just been defeated 9-1 by the Academy side in the last scheduled match of the season, which earned the Academy side the play off, the Taverners side of Colin Harrop, Alan Tyrrell & the recalled captain Geoff Read, were not going to let the form book worry them. The flowing, attacking style of the Academy side was missing in the early sets and the Taverners went into a 4-2 lead and only required one more set to take the title. The Academy youngsters Sam Perkins and Daniel Barnett both won crucial games to keep the Academy in the match and it was left to the ‘old man’ of the Academy side Simon Furgol, who topped the averages in Division 2, to play in the deciding match against the Taverners’ Alan Tyrrell.  Tyrrell won the first two games but Furgol got the next two, so it was all down to the final game, which Tyrrell took 11-5 to crown Taverners champions of the Second Division

The Dyment Doubles final, in contrast to the above match, was a rather one-sided affair, with the Torbay Table Tennis Academy I side defeating Newton Bishops 5-1. The Newton Bishops’ side of Jim McIvor, Connor Adams and Scott Jessop did go into a 1-0 lead, but that was as good as it got for the Newton side as the Academy team of Kris Piwowar, Patrik Cincala & Daniel Brewer won the next 5 sets to take the title.

The final business for the 2013-14 season was wrapped up at the League’s AGM and Presentation evening held at the Farmhouse Tavern, Torquay.  The Chairman, Geoff Read, summed up a very successful, competitive season to a well-attended meeting. Robert Excell, the League’s sponsor, then presented trophies to all successful players and teams. 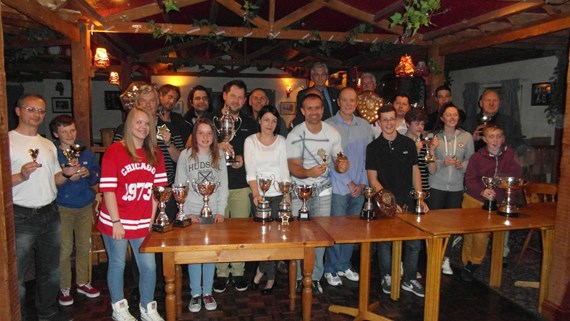 OTHER AWARDS (By Committee)