The Early Season Tournament was staged for the second time at the Torbay Leisure Centre on Sunday 16th November 2014, new tables and equipment supplied with the help of a grant from Sport England, gave the tournament a more professional feel.

A good entry enabled an excellent day's table tennis for those that participated.

The main event being the Collins Cup Handicap Singles.

Group Winners were:  Nick Williamson, Tom Ricketts, Dan Barnett, Patrik Cincala & Clive Banham,  however the final went on to be contested by two players who only progressed from their groups as runners up!   An inspired Dan Webster-Hall  defeated Nick Williamson and Tom Ricketts on his way to the final, while Kelvin Cheung saw off Klara Cincalova, Clive Banham and Patrik Cincala to make the final.  Dan won the first game of the final but lost his offensive play as Kelvin tightened up his game.  Kelvin Cheung winning in 4 games 4-11, 11-4, 11-7, 15-13.

The Handicap Doubles threw up some interesting partnerships, with some fine performances from old stagers David Friend and Geoff Beavington and youngsters Dan Barnett and Klara Cincalova with both pairs losing in 4 games in the semi-finals.  The final was played out between a pair in the middle of the pairings and one at either end of the handicaps.  Albert Gomez and Doug Morgan’s consistency saw off the pairing of Zoe Barnett and Clive Banham 11-6, 10-12,11-6, 11-8 in an entertaining final.

An excellent days' table tennis was rounded off with the presentation of the awards by Robert Excell, the League's main sponsor.

Many thanks to Nick Halse, tournament organiser, and all those who helped setting up and dismantling the venue. 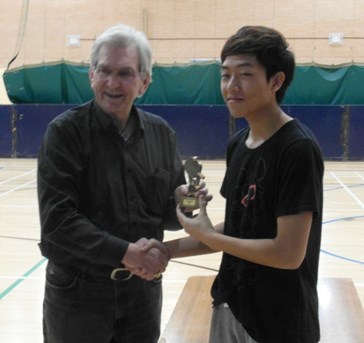 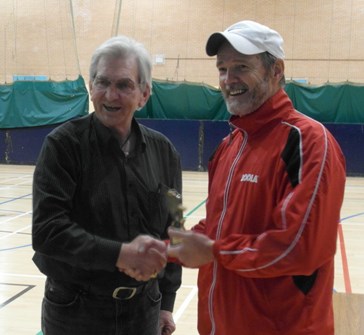