Table Tennis has now resumed for the Winter season with the first round of matches played last week. Last years Champions Cramlington Casuals got their campaign off to a winning start when they fielded a depleted 2 man team at home against newly promoted Newton A team of John Russell, Graeme Bell and Craig Fryer. Despite only having two players both Andrew Wilkinson and Steve Penman won all their games and combined to also win the doubles to run out 7-3 winners. The other tasty fixture in the Premier Division saw two other potential contenders The Mount A take on NESLC Eagles. The Eagles have strengthened their squad with the signing of Martin Schapira and will push all the way this year. The match ended in a draw with the Mounts Graeme Barella winning all 3 of his matches against Schapira, Jim Stamas and Richard Wilson. He was backed by Anthony Ainley who beat Wilson and Phil Prady. NESLC,s number 1 Stamas opted not to play in the doubles and the Barella, Prady combination proved too strong for Schapira and Wilson winning in 3 straight games. A point of note is that NESLC start their 70th consecutive season in the Northumbria League this year which is quite an achievement. St Chads had their match postponed vs the NE Chinese A team as their top student players have not started term yet and they too will be in the chase for honours.

In division 1 Old England Jacks relegated from the premier last season got off to a fine start winning 7-3 against Matfen Centurions. This looks to be a closely fought division this season with many teams in with a chance of taking the honours. The Mount C also won 7-3 against Ouston A. The Mounts C team fielded their new summer signing Rob Lawson who chipped in with one win but was helped by a resurgent Tony Gelder who won all 3 and Mohinder Rawat who took 2. The Mount also taking the doubles. Another team looking to do well is Tyneside TTC’s A team who had their match postponed against the Chinese Associations team as they were having problems fielding a team. Mitford now down to only one team again had a bye and start their campaign this week and are sure to be in the hunt for honours too.

Cramlington Falcons won Div 5 of the Summer League 2017. They are now playing as Cramlington Ravens in Div 3 of the Winter League. Their first match was away to Cramlington Jaguars on Thursday 14 September which they won 4-6.

Afterwards they were presened with their trophies for winning Div 5 of the Summer league. I have attached a photo - left to right is Jack Cairns, Israel Shodeinde and Alfie Davies. 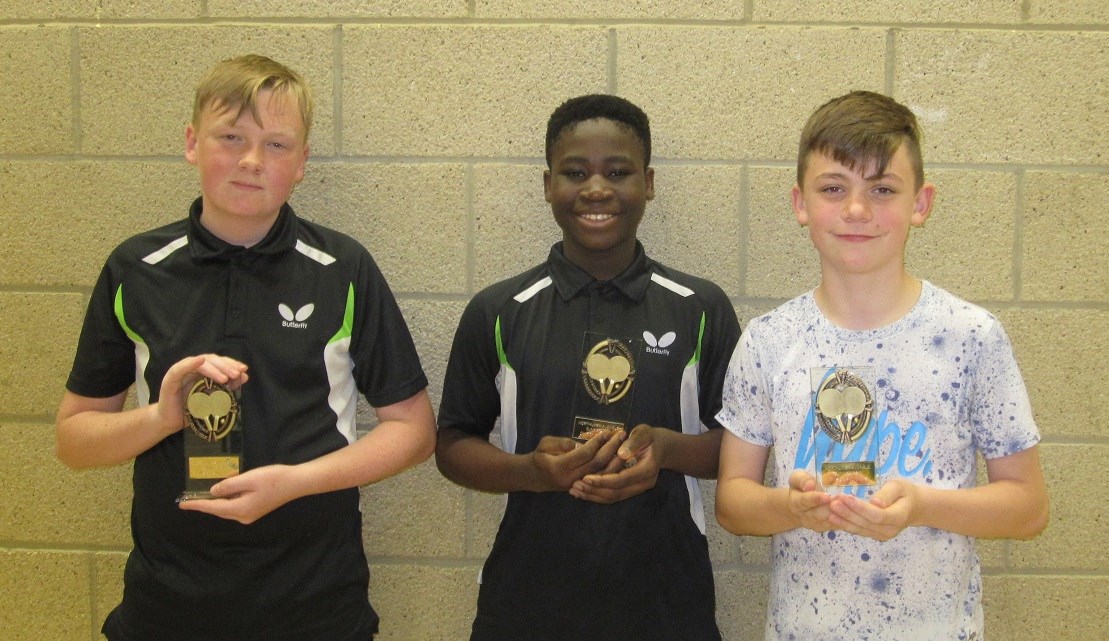