The Junior and Senior Top 12 titles holder Sean Drewry added the DLP Adapted Bathrooms sponsored Divisional Singles Championship to his impressive list of table tennis titles in the secondary hall at the NSC last Saturday. The runner-up, Arbory’s Sam Bailey, was hoping to go one better than last season but Drewry took over from where his Copy Shop A team-mate Ronan McDonnell left off.

Surestrike Ramsey’s Tim Baker retained the Division Two championship title and his surprise opponent, Juan Moore from Travellers B, demonstrated just why he had been awarded the most improved player trophy at the 2014/15 presentation evening.

All the competitors had been seeded based on their league average and were systematically allocated into groups. The round robin matches in each division led on to the knock-out rounds. All the matches were played over the best of five sets and, thanks to the cooperative efforts of Tim Baker and the tournament committee, the afternoon event was successfully concluded on schedule. 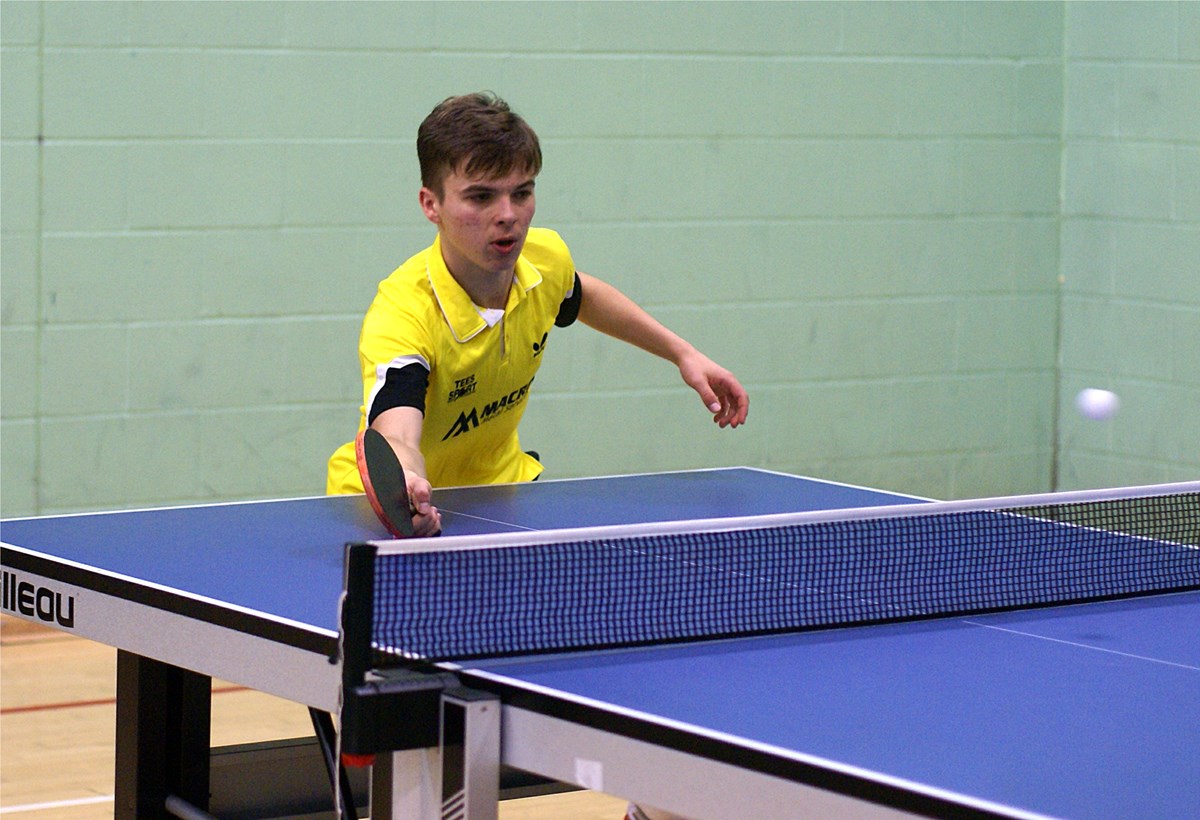 The top seed Drewry won all his group matches and was the first finalist through after beating the reigning Greystone LLC sponsored Island Closed champion Liam Chan 11/7, 11/6, 6/11, 11/9 in their fast flowing semi-final. The second semi-final was between Sam Bailey and the jet-lagged Malcolm Cummings who had just flown in from America. Without going to a tie-breaker their match could not have been much closer.  Cummings from aptly named Travellers A attacked at every opportunity but Bayley pulled back from 1-2 down in sets and sent Cummings going 11/9, 7/11, 7/11, 11/9, 11/9.

In the earlier round robin matches Bailey had beaten his former team-mate Liam Chan; now representing Travellers A, 11/6, 7/11, 15/13, 11/9 and that enabled Bailey to dodge Drewry in the semi-finals. Both Bailey and Chan Snr made short work of Liam’s son Keeran and Surestrike’s Rhys Yardley. As a result Liam took the runners-up spot and had the dubious pleasure of facing Drewry in the other semi-final. Pen-holder Keeran wrote-off Yardley 11/7, 11/9, 11/6 to avoid the wooden spoon.

On the other side of the draw Cummings almost got off to a flying start. After stealing the first two sets from Drewry he was just one point away from victory when Drewry snatched the third set on a tie-break. Drewry then revved-up his forehand and looped the loop past Cummings 10/12, 9/11, 13/11, 11/4, 11/5. Left-hander Cummings didn’t drop a set in his other three matches to reach the knockout stages.

Arbory’s pen-holder Mike Tamarov, who finished as runner-up in this competition in 2013, took two tie-breaks to blot out Strathy’s Julian Briercliffe 11/5, 15/13, 12/10 and finish third in the group as both he and Briercliffe blasted past the remarkable fifteen times holder of the over 60’s veteran’s championship Graham McFarlane.

The final between Drewry and Bailey was a repeat of the recent inaugural Division One Grand Prix. Both players really went for their shots, rarely was a defensive shot played, other than the odd block. Drewry favoured his forehand and darted around in order to use it almost exclusively.

Bailey was more balanced and hit from either wing but he couldn’t cope with the sheer speed of some of Drewry’s attacking shots. Had Bailey won the tense tie-break that decided the first set, perhaps the end result would have been different.

Drewry went on to dominate the next set and although Bailey bounced back in the third it was once again Drewry’s day. He went on to win the divisional championship title 13/11, 11/4, 6/11, 11/9. 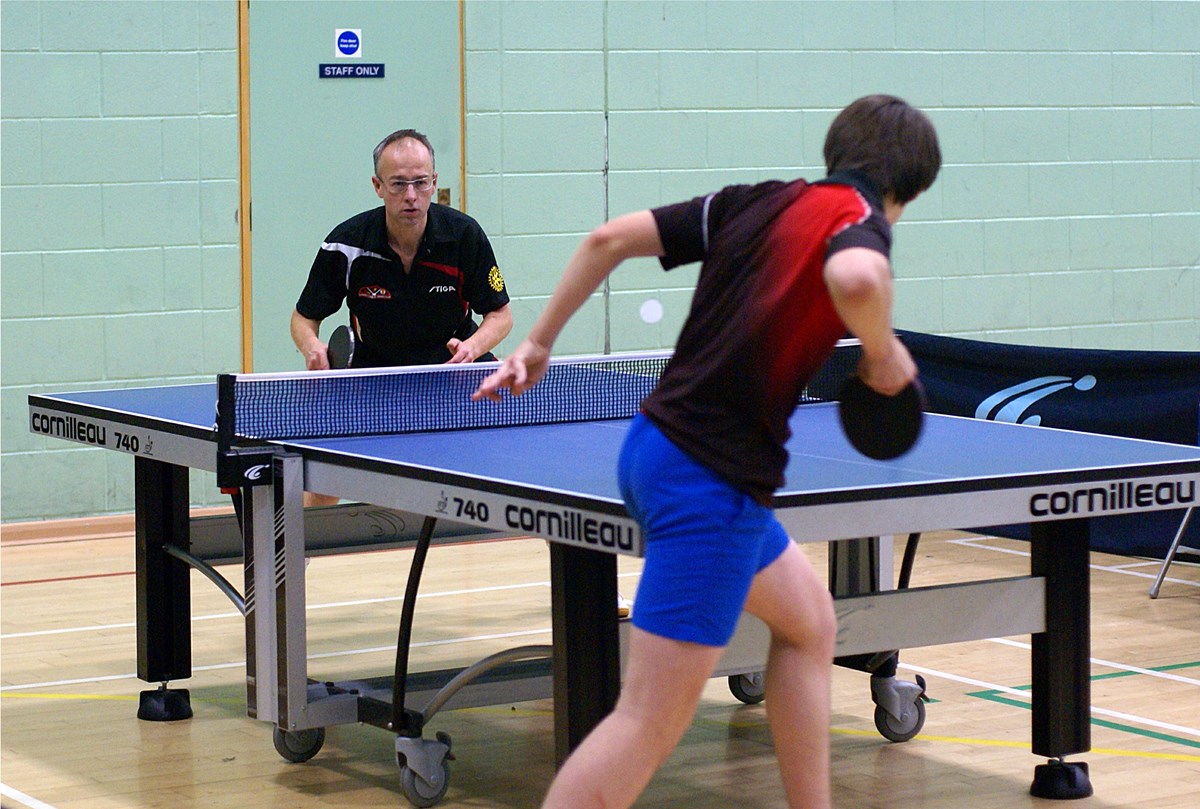 Baker’s opponent in the final was perhaps somewhat of a surprise. Juan Moore the island junior U’14 champion had already beaten the ace defender Curtis 11/8, 11/5, 2/11, 7/11, 11/3 at the group stage and then the experienced Dario Mazzotta 11/6, 11/2, 11/8 in the quarter-finals. He then found himself up against his coach Paul Mathieson-Nelson who had topped Group B and was runner-up in this competition last season. Moore was undaunted and despite going behind his steady play paid off enabling him to reach the final 6/11, 11/9, 8/11, 11/9, 11/7.

Sorting the minor places in Group B required a calculator as Dunning, Malcolm Lambert and Sasha Thomas had all won two and lost two games. They finished in that order as, having all defeated Kerenza Baker they then proceeded to lose to each other. The biggest upset was the 9/11, 5/11, 11/6, 11/9, 11/9 defeat of Lambert by Peel B’s rising star Thomas who had been beaten by Dunning in straight sets.

Lambert’s 11/7 fifth set win over Dunning was good enough to get him into a play-off for a quarter-final place but Kevin Drewry, who was placed third in Group C, won that decider in four fast sets. Group C had been topped by Peel’s Malc Lewis with wins over Mazzotta, Drewry and young Freya Melvin. Lewis then lost his quarter-final to Dunning 6/11, 11/9, 10/12, 6/11 and taxi driver Mazzotta motored back to work after failing to make the semi-finals.

Juan Moore had exceeded his own expectation by reaching the final but it did underline his continued development as a player with promise. The final with Baker was a somewhat cagey affair. Moore took an early lead but failed to close-out the vital first set which ended on a tie-break. Baker then dug in and allowed Moore to make mistakes by trying to force the pace. There were some excellent rallies but Baker’s greater experience saw him retain the divisional trophy 12/10, 11/6, 11/8. 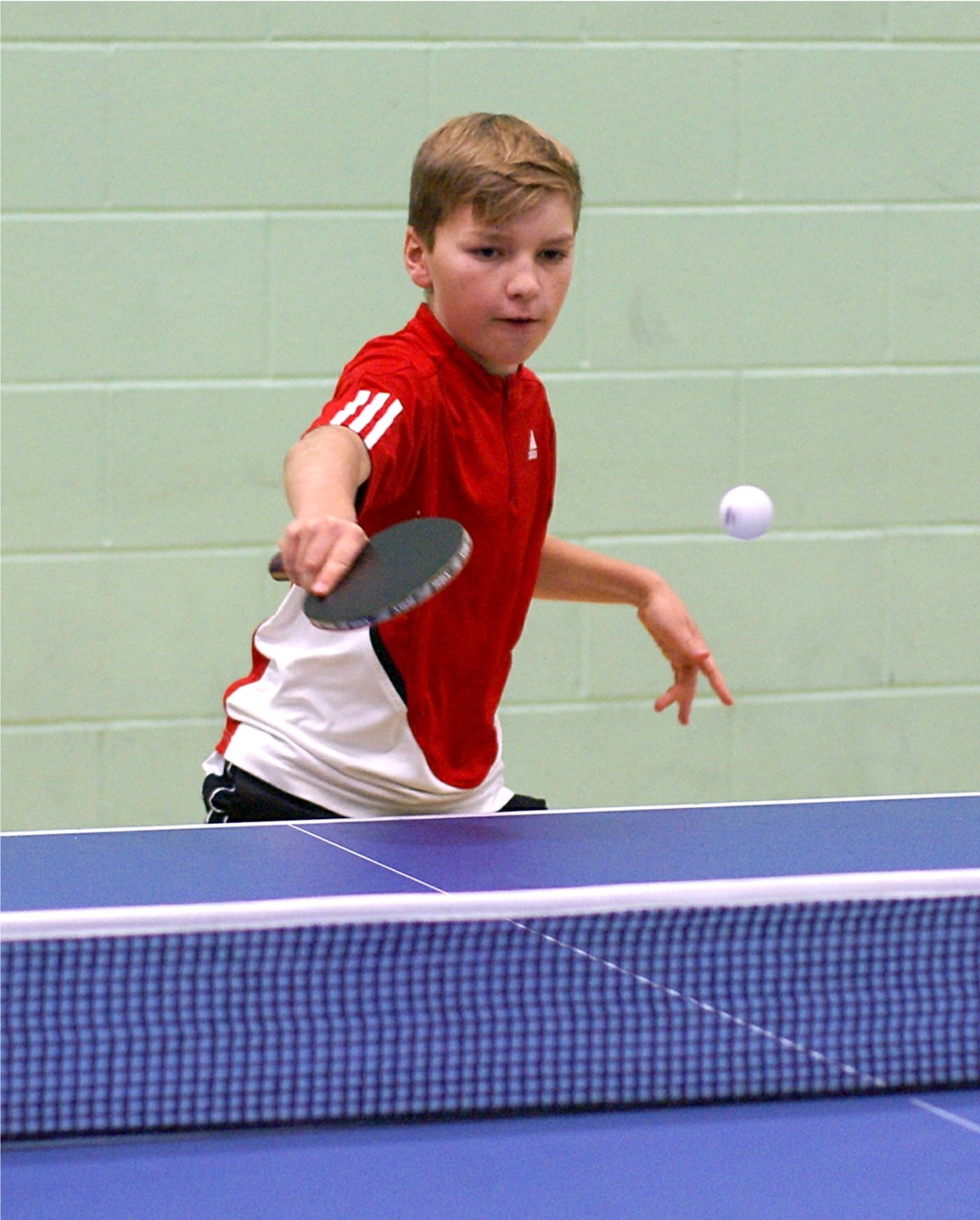 The three top seeds, Billy Coulter, Zac Walker and Tower C’s Barry Jenkins all topped their groups unbeaten. Pat Halliwell, Tiernan Garvey and Sally Green were the respective group runners-up and hence booked their place in the quarter-finals. Cameron Dudley finished third with two wins in his group of five which put him through too.

Coulter reached the final with a three sets win over Garvey who put up a tremendous fight particularly in the last set, but was just outpointed 6/11, 6/11, 11/13. Walker was drawn against the more experienced Jenkins in the second semi-final but Jenkins couldn’t control Walker’s whizzing top-spins. Walker went through 11/7, 14/12, 11/8.

The two Copy Shop D team-mates, Coulter and Walker, are frequent sparring partners and so know each other’s games well. It was unsurprising then, that the final would be a free flowing affair. Coulter took the first set on a tie-breaker and quickly consolidated to make it two.

Walker was more mobile and he began to exploit Coulter’s tendency to stand and sway rather than move into a perfect position to execute the winning shot. Consequently, as Walker went for the angles Coulter sometimes found him-self off balance. Both players have great hand eye co-ordination and super reactions so the rallies were swift and exciting to see.

In the end the difference between these two young stars boiled down to better footwork. Hence, Walker, the current U’12 singles champion, added the divisional title to his tally. The match score was 11/13, 5/11, 11/7, 11/8, 11/7 and I predict that, with continued coaching, these two players will be rivalling their Copy Shop A heroes Drewry and McDonnell in a few years time.