Talented table tennis star Olly Tyndall is celebrating after being called up to the England Youth Squad. 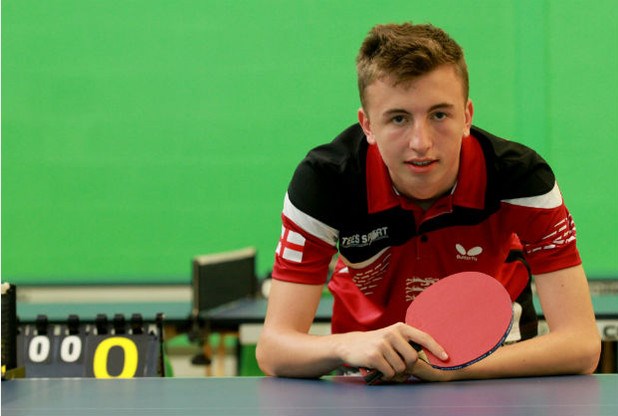 Olly, 15, from Quedgeley, has been playing the sport for six years, first picking up a bat when his grandfather gave him and younger brother Ben a table tennis table for Christmas.

Since then the Severn Vale pupil has made real progress, winning the Gloucestershire under-18s title for the last four years, and steadily climbing the national rankings.

He plays locally in the Stroud & District and Gloucester table tennis leagues, but also represents Bristol Table Tennis Academy in the Mens Senior British League, and Sussex Alliance in the Junior British League.

The national call-up is the latest step on Olly's road to achieving his aim of playing for England.

He says: "I didn't expect to be selected as this is my first year playing in the under-18 age group, but I've been to England training camps over the summer and the selectors said they were impressed with my progress and my attitude to training."

Olly currently trains at the Bristol Table Tennis Academy for three evening and one afternoon sessions per week, as well as playing league matches.

The first squad event is at Lilleshall this weekend when Olly will be working with top coaches alongside the best of England's juniors.

He said: "I owe a lot to Gloucester coach Graham Slack who took me from complete beginner to making the national final at under-12 level, and to Eddie Roofe from Swindon who still helps me today. They both gave me a great start and I'm happy to keep working to reach my goals."

Looking ahead to Youth Squad training, he adds: "I think we're going to be pushed pretty hard, but I'm looking forward to it and the chance to get some more good coaching. I want to improve my national ranking – I'm currently 20th in the juniors – and gain some international experience, but my main aim is to show that I'm one of the better members in the squad and prove that I'm good enough to play for England."