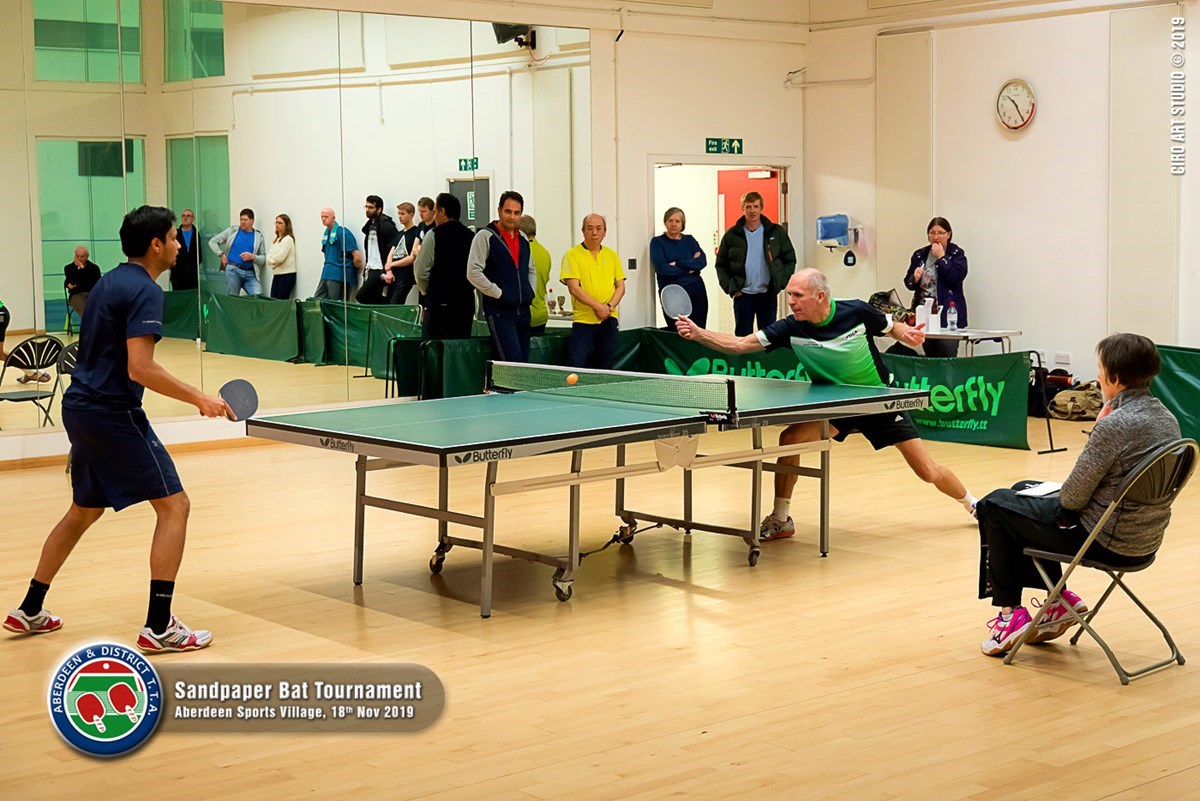 Second ADTTA Sandpaper Bat Tournament, held at the Aberdeen Sports Village on 18th November 2019, turned out to be considerably successful. Increased interest forced organisers to change venue from Westburn Sports Centre to Sports Studio at ASV. There were 16 players all together competing on the day with even more people interested in participating. It's great to see this sport growing in Aberdeen along with regular table tennis development.

Big thanks to Juliet Johnston for providing competition bats and balls and support during the event. Extended thanks to Derek Johnston for laying out 'ping pong' rules for us and helping with presenting trophies to our winners. And last but not least, massive thanks to Alison Woods who did an excellent job on the day, managing information flow and time keeping throughout the evening.

Event started with 4 groups of 4 with two players qualifying from each group to the KO stage. There was a mixture of players with some ping pong experience and those who picked up sandpaper bat for the very first time on the day.

Charlie Matthew comfortably got to the top of Group 1 with 3 straight wins with Umesh Samo Nakho qualifying from the second position. In Group 2 Gregor Ksiazek nearly lost his first match to George Allan where 2 sudden-deaths situations happened in only three sets. George missed a smash in the 3rd at 14-all! Gregor then won other 2 matches and qualified from first position. Graham Deller who played with sandpaper bat for the first time did exceptionally well, ending up second. Catherine Inverarity did not have any troubles winning Group 3 and some training prior to the event has certainly paid off. Chelsea Wong, by beating Harry Vine and Alex Rae, qualified from second position. In Group 4 Rob Tanner who already played last year and had sandpaper bat training, finished second. Dennis Oon despite playing with an anti-loop rubber for eons, found switching to sandpaper bat a bit tricky. Using penhold grip also wasn't as much of an advantage. But still, experience allowed Dennis to overcome some issues and he eventually won his group.

Eight players qualified to the KO stage. Chelsea met Dennis in the quarter finals and did really well, keeping the rallies going but Dennis prevailed at the end. Charlie Matthew went through to the final unscathed, beating Graham Deller and Dennis Oon. In the other branch of the KO stage ladder, Umesh Samo Nakho wrecked havoc dispatching Catherine Inverarity and Gregor Ksiazek. It was Umesh's first appearance in sandpaper tournament with no prior preparation, but it seems his regular table tennis playing style, especially forehand smash, made for an easy switch between modern and sandpaper bats.

In the final Charlie managed to force Umesh into deep defence. Charlie and Umesh met at the group stage earlier on and that experience certainly helped Umesh but was not enough to stop Charlie from winning in two straight sets. It's great to see Charlie competing in Aberdeen again after a long ... a fairly long break. 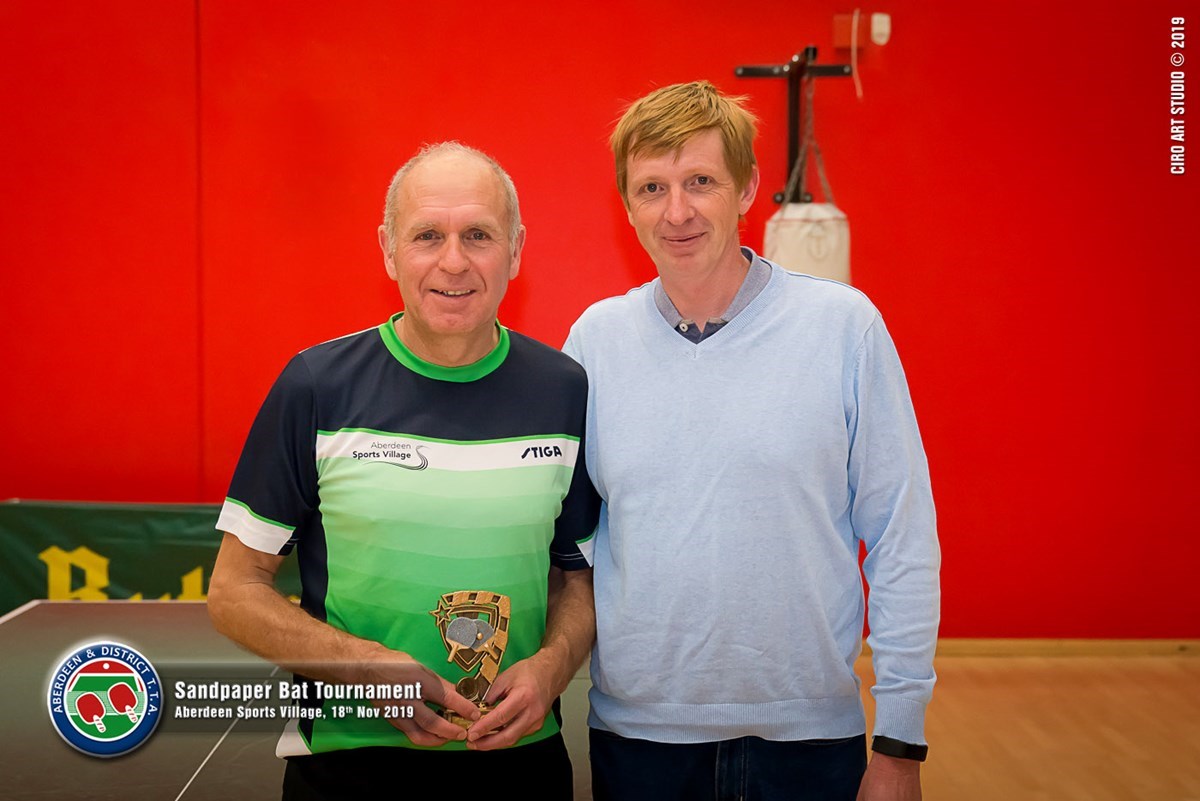 An excellent night all together, plenty fun for everyone involved. There is certainly a potential to grow 'ping pong' in Aberdeen. Giving time, we should be able to catch up with Dundee and Edinburgh in terms of number of players and overall performance. 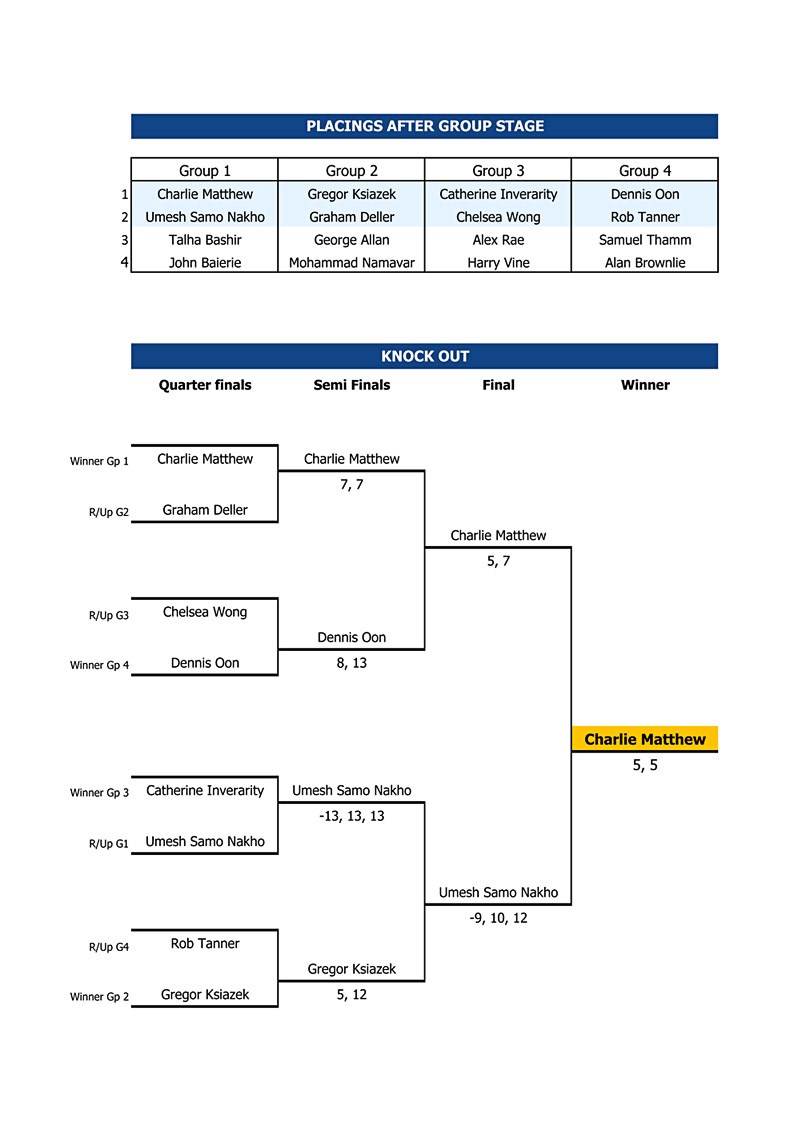 Four ADTTA players went to Dundee to represent Aberdeen in World Championship of Ping Pong Scottish Qualifier on Saturday, 21st December. These were: Charlie Matthew, Rob Tanner, Umesh Samo Nakho and Gregor Ksiazek. Although without major success, it's good to see our players performing really well against those who've been part of 'ping pong' competitive scene for many years.

Same as last year, Gavin Rumgay won the event, getting the better of Ian Johnston in the final (12, -11, -13, 6, 8). Both Gavin and Ian will represent Scotland in World Championship Finals taking place at Alexandra Palace (London) on 25-26 January 2020.

Link to the gallery with photographs from WCPP Scottish Qualifier 2019:
https://tabletennis365.com/aberdeen/Gallery/1340/WCPP_Scottish_Sandpaper_Bat_Qualifier_2019-20